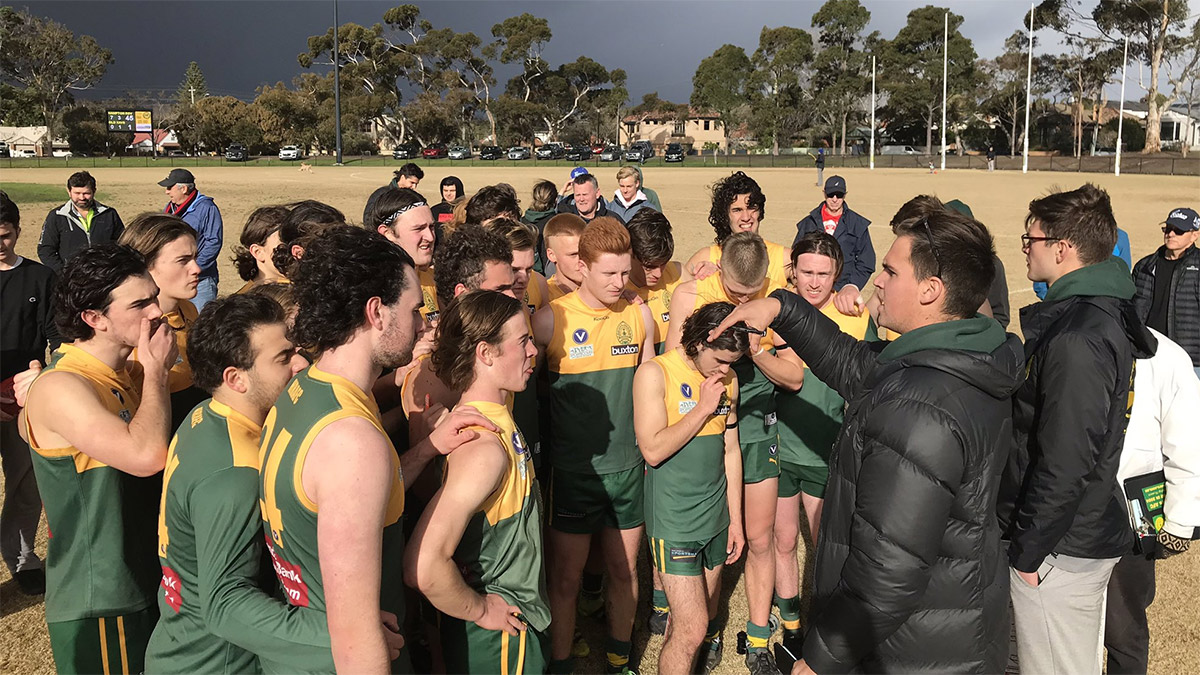 The U19s had a big 133-point win over Old Xaverians at the Boss on Saturday, with the boys dedicating the game to Brendan Kenny following his recent passing.

The Club is enormously saddened to hear of the passing of Brendan Kenny (Liam’s Dad).

Many parents and players from last year’s U17’s Premiership team will remember Brendan as a great Rovers Dad, supporter, volunteer and previous Team Manager! Always helping out and for many years assisted at training in the Juniors. A tireless ‘right hand man’ and the person Miranda (our Team Manager) always turned to if she needed help. He always took on her role as Team Manager if she was unwell or away.

Liam had decided to concentrate on VCE and not play this year, even though he would clearly miss being at Rovers. Brendan had hoped Liam would be back at Rovers next year and Miranda has certainly missed Brendan’s company this season. They would often solve the world’s problems over a coffee most weeks while watching the boys train.

Brendan passed away early Friday morning after a brief battle with an aggressive cancer, something he had kept to himself and those closest to him. Having not seen or spoken to him recently, we had no knowledge he was unwell, and this terribly sad news has been quite a shock for many of us. Brendan and Liam have for many years been a very big part of the Rovers family. Both the Team and the Club felt wearing Black armbands was certainly appropriate.

Our love and thoughts are with the Kenny family at this very sad time. We know their strong sense of family and the support of many friends will help them through. The Funeral Service for Brandan will be held on Wednesday 17th July at 2pm at St Mary’s Primary School, Holyrood St, Hampton.

Round 12 saw the Rovers Under 19s at home against Old Xavs, where the boys were keen to redress the losses of the previous weeks and play well in memory of Brendan.

It was great to have quite a few lads back in the side this week – Chris Perkins, Lachie Fraser, Max Coughlin, Harry de Wolf, Cooper Watson, Jacob Gray and Ben Marron, who were all clearly looking forward to a run.

A strong early start with Ben Allen rucking well and the lads clearing quickly from the centre.  This set the tone for the rest of the game with 7 goals 3 kicked to a lone point for Old Xavs. Jacob Gray leading the charge with 3 goals until Old Xavs changed tack a little to try and stem the flow.

The second quarter was a bit closer as Xavs moved a few players to shut down some of our more dominant players. The strong start in the first had given the lads some confidence however and they were back to playing more cohesive football – something that had certainly been missing over the past few weeks.

While the rain thankfully skirted around us, the ground and ball was still slippery at times. Despite this, the overhead marking was consistent and strong lead-outs from Cam Morris with solid inside-50 deliveries yielded another strong scoreline for the Rovers. Better crumbing around the contests, more talk and support from teammates when under pressure saw a more fluid game emerge and a massive 92 point lead at the final change.

With such a big lead, Coach Sam Care had the luxury of being able to move many of the lads around in the final term, often in unfamiliar positions. This appeared to have no ill-effect whatsoever, with another 6 goal term and some outstanding pieces of play.

Lachie Fraser was sensational all day, no matter what position – ending with 5 goals and a well-deserved B.O.G.

Pat Starcevich proved again what a versatile player he is becoming and Samme Raghdo was solid (as always) in defence. A great 5 goal effort from Cam Morris whose strong leads up forward were rewarded with solid passes from his teammates. Chris Perkins was as good as ever, bagging 2 himself and damaging all over the ground. Tom Marron provided good run out wide, with sharp passes into the Forwards. Honourable mentions must also go to Tanner Ellis, Blake Bergman, Patrick McPhee and Max Coughlin who were all enjoying good form. Everyone contributed this week and while the scoreline doesn’t suggest it, Old Xavs tried hard all game but were simply outgunned.

Our lads obviously enjoyed ‘a day out’ and we must carry this form into next week, against a far stronger opponent in Glen Eira!

In the end, a thumping 133 point win to the lads, a return to form and more importantly, a fitting result in memory of our friend Brendan – he would certainly be smiling…