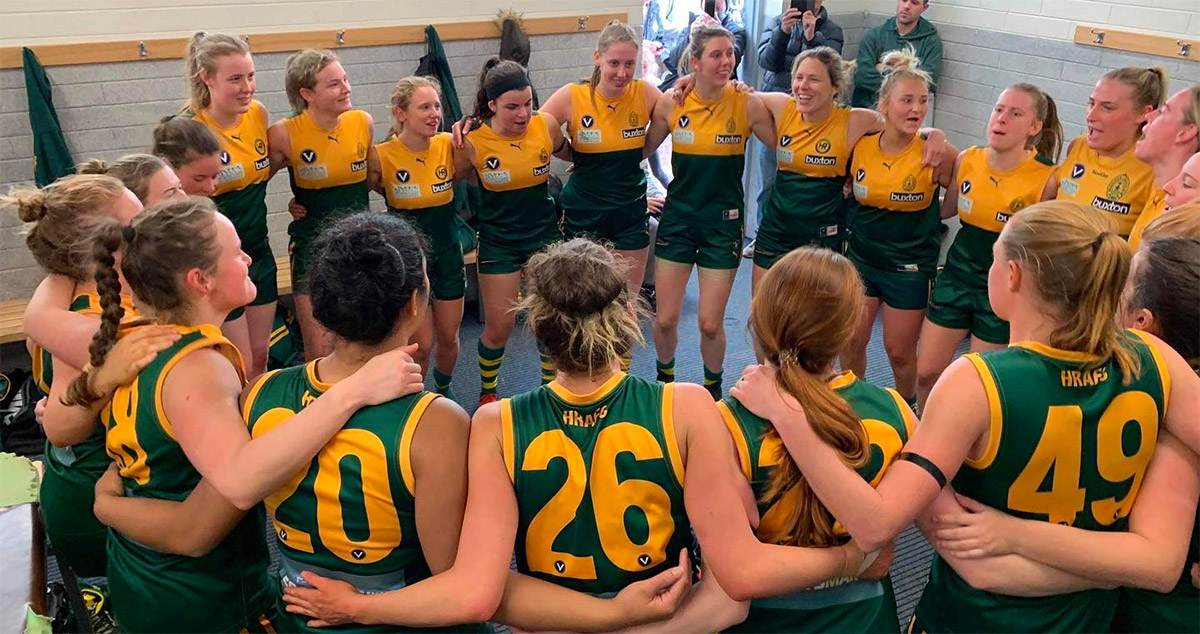 The Rovers women’s match this week was an away game against Bulleen Templestowe. The ground was huge but was in good condition and amazingly, the sun was shining!

The big change this week was Nicky filling in for Sonja for the Team Manager role. I took the opportunity to interview Nicky before the game and said she hoped to be back playing very soon. Great news!

These girls do a great job week in week out along with the coaches Paul and Corey who do a fantastic job and were really working hard, as always to get the girls prepared and motivated for this one.

The game got underway and the Rovers had most of the play but just couldn’t capitalise on the scoreboard.  However, the ‘Rovers’ spirit was there and it was great to see the immediate impact and great work being done by the girls who were back in this week, Amy Cullen, Hayley Gould, Grace McArthur and Chloe McLaren. However, the swirling wind was making accurate kicking very difficult and neither team could kick a major in the first quarter.

The second quarter started with the Rovers going straight into attack due to the great ruck and roving combination between Bianca and Bree, who as always, was in and under the packs getting the ball going our way forward.  Bulleen were up to the task and defended very well, bringing the ball into their forward line. Then after receiving a 50-metre penalty, they put through a great long range set shot for goal and the lead.

We sensed Paul wasn’t going to put up with this so after a few strong messages were conveyed to the girls, they regrouped and really lifted their work rate.  Mandy dropping back in defence helped the back line create a wall that Bulleen just couldn’t get past.

Chloe McLaren did some great work coming off the back line, including a beautiful gather and run and later on a nice mark and driving kick into the forward line.  Chloe Mirams produced a brilliant goal saving smother which resulted in a chain of awesome teamwork by Taylan, Dev, Jaimie and Stacey. This carried the ball up the ground where Harmoni took an awesome mark and finished off with a beautiful kick and goal, also being the Rovers first goal for the match.

The Rover took a 4-point lead into the half time break.

Our back line in the third quarter were being put under real pressure by Bulleen however our women were more that up to the task!

Great examples of this were Megan’s perfect tackle that resulted in a much-needed turnover and Kristy’s pressure and clean-up work out of defence.

Again, it was both Chloe McLaren and Chloe Mirams who were constantly saving the day down back for the Rovers with their strong marking, teamwork and desperate back line efforts.

Up forward, despite our efforts, we just couldn’t convert with a goal. Katilyn, Zara, Bianca and Hayley were creating opportunities, but we only managed 3 points for the quarter. To make matters worse Bulleen were able to snag an ‘off the ground’ goal late in the quarter.  We then held onto a one-point lead going into 3 quarter time.

The last quarter was a real slog with both teams going very hard at it! Taylan and Bree were continuing to pick up possessions around the ground. Our backline continued to hold out Bulleen, Amy took a brilliant saving mark on the last line of defence and when Chloe McLaren repeated the same you could sense our women weren’t going to let this match slip. When we then got the ball into our forward half, some slick teamwork from Kate to Taylan then to Tarryn who slotted a great long goal!

Bulleen did get one more goal following a dubious free kick and 50 metre penalty, however the Rovers managed to hang on for a well fought victory!

The Rovers Women sit third on the ladder, two games and healthy percentage ahead of Prahran, with three games of the regular season remaining. Following the bye, the Rovers will face Swinburne Uni at Castlefield Reserve on July 13.

Thanks to Tim Ebbott for the match report.