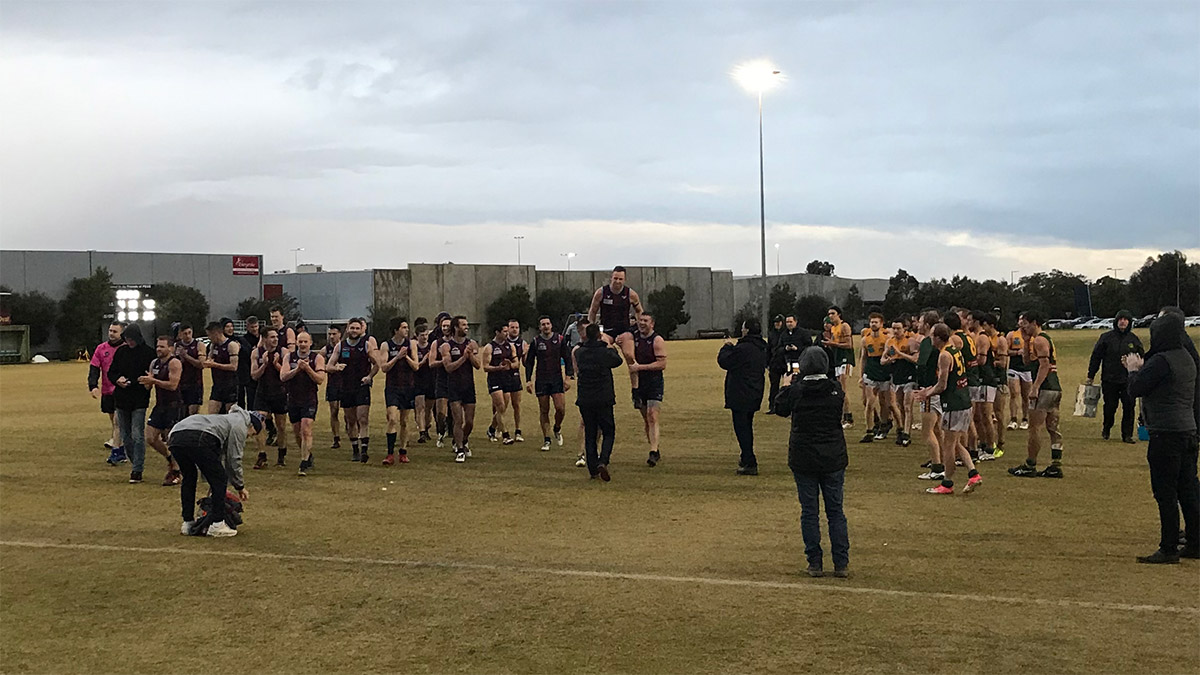 It was a tough day out for the Rovers on Saturday, falling to PEGS by 17 points in trying conditions at the PEGS Sporting Field.

With a wealth of players missing from the side, it was looking like a tough assignment as it was. Add to that the weather – it was wet, artic cold, and blowing a gale straight down the ground, with the conditions better suited for the larger PEGS bodies. The home side were also buoyed by the star player Daniel Flaherty playing his 250th game.

A quick glance at the final score may make it appear as a deplorable performance, but that certainly wasn’t the case. At half time, PEGS were goalless with 10 behinds on the board, while the Rovers had kicked 2.6, to lead by eight points. A 10-minute period in the third term saw the home side boot their only four goals of the game and that was the difference.

The wind was blowing to the south and ball barely came towards the pavilion end of the ground. In fact, just one behind was scored at the northern end and that was to the Rovers in the first term. PEGS found themselves with 10 behinds at quarter time. Even kicking with the howling gale, kicking for goal was a lottery.

Sam Bradford kicked the first goal of the game, 13 minutes into the second term. Corey Jones kicked the Rovers other major. The boys were trying hard, but struggled to convert. The conditions are made for Harrison McIntyre and he hustle and bustled, while Fogarty, Traegs and Prosser also stood out. Without a ruckman, Matt Innes was called up to the Seniors and battled hard all day.

12 scoring shots to none in the third hurt the Rovers and at the final break, PEGS held a commanding 24-point lead and Hampton would need to replicate that performance to have any chance.

The heavens opened and temperature dropped further, and unfortunately, despite a few shots on goal, the Rovers simply could not kick a goal. The effort lifted as the boys realised time was running out, but seven behinds was all that was scored, with the final siren confirming the sixth defeat of the season.

A win would have lifted the Rovers leapfrog Mazenod and Marcellin to fifth position, but instead, the boys will head into the two-week break unmoved in seventh spot on the Premier C table. Next up, the Rovers take on undefeated Williamstown CYMS on July 20 at Boss James Reserve.

In other games, the Reserves also went down to PEGS, the Thirds battled hard but fell to top side Kew at Castlefield and the U19s were defeated by South Melbourne. The only win of the day was recorded by the Senior Women, knocking off Bulleen Templestowe by one point away from home.

All Rovers players wore black armbands on Saturday, in honour of David Martyn, who sadly passed away earlier in the week. David was a long-term supporter of the club, always there supporting his sons, with Benn a two-time premiership player in 1998/2001 and Guy a two-time premiership coach in 2013/14, also playing in the 2014 flag.