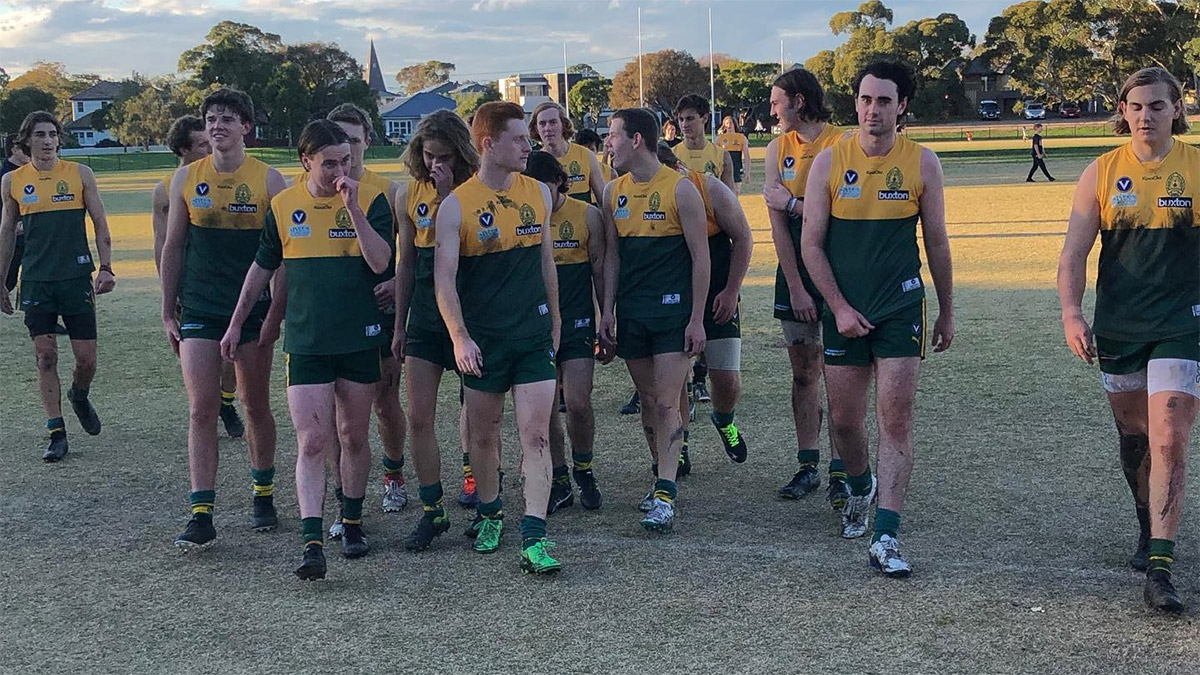 Round 9 saw the Rovers U19s back at the Boss against PEGS on a nice, still winter’s day.

Still with a few lads out due to injury but coming off a week’s rest, there was clear enthusiasm among the boys for the upcoming game.

PEGS were clearly light-on for numbers but showed definite improvement after our last encounter. Their ball movement and pace in the first quarter was very competitive, ensuring a close scoreboard by the first change. First blood to Matt Spaz, clearly relishing his role at full forward and this was backed-up by goals to Cam Morris and Tate Gramaconi.

Now expecting a much closer tussle, our boys came out strongly in the second and immediately saw results. Solid marking resulted in 2 goals for Sammy Raghdo who was also enjoying a change in roles this week. Tom Marron kept the board rolling with a goal and some accurate kicking to set-up goals for teammates as well.

Liam O’Driscoll bagged the first (of quite a few) with Harry de Wolfe and Cam Morris chiming in as well. With no bench and now a man down, PEGS were certainly trying hard but simply didn’t have the manpower to stem the flow. While they bagged another goal and some minors, the game was clearly becoming more one-sided.

This allowed coach Sam Care a little more freedom than usual with positions.  A number of the lads experienced new roles this week but still retained a solid handle on our ‘brand’ of football. Lachie Carrigan was having another good game and Max Coghlin (goals to both) showing his prowess yet again with good overhead marking and strong kicking. Ben Allen proved his worth in the ruck again, with Mitch Hall and Mo Labib building on their crumbing roles around the contests.

In the end, PEGS lack of numbers hurt them badly and despite their best efforts, we kicked away for a comfortable win with 12 separate goal kickers sharing it around. Pat Starcevich (1 goal) and Max Van der Straaten deserve mentions and these two lads are building on their strengths every game.

Tom Marron was in fine form with 3 goals for the game – the lads learning they only have to look wide and there he’ll be, out in space again. Cam Morris ran himself back into solid form with strong marking and 4 goals in the end but B.O.G was Liam O’Driscoll with his game-high 5 goals. Well done Liam!

In the end, a comfortable win and the chance to hone some of the finer game-plays in preparation for next week against a better-performing Marcelin.

Sam is away on holidays next week so the lads will be under the guidance of Assistant Coach & North Melbourne player Will Walker for our last game on the ‘Bullring’ (Castlefield). So, come down to support Will and the lads in what will likely be a much closer contest.

Once again thank you to our volunteers, Timekeeper/scoreboard – Paul O’Driscoll & Ralph Bergman, Interchange Steward – Jason Cave, Runner – Will Morris, and extra thanks to Brad Young for washing the jumpers and all those who helped tidy-up to help Miranda out.