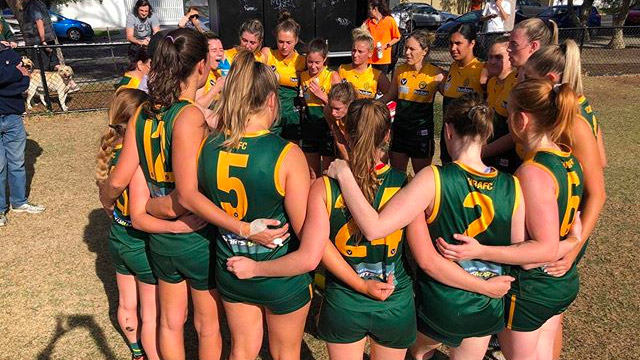 After a rousing pre-game speech by stand-in coach Corey and great organisation skills as always by Sonja, the Rovers Women were primed and ready to go against Oakleigh at Castlefield Reserve.

The Rovers started against the breeze and soon knew they were in for a hard battle as Oakleigh were proving a very strong and determined opposition and had the upper hand after defeating the Rovers in a practice match.

After quite an arm wrestle early, the Rovers got the ball forward to the goal square where Maxine did a ‘don’t argue’ that Dusty would be proud of and then slotted through the first goal of the game.  Not to be denied, Oakleigh responded with next goal of the match, however our dominance around the ground was starting to show due to our skill and determination.

Amy and Bree-Anna were picking up kicks at will, Bianca was working very hard and dominating the ruck duels. Mandy was in everything finishing off with long and penetrating kicks into our forwards, one of these creating Rovers next goal, a great turn and snap shot by Harmoni!

The backline led by Nicky did a great job throughout the term and Kristy’s inspired chase down and tackle was a great example of the Rovers commitment! Scores were all tied up at quarter time at 2 goals apiece.

The second quarter belonged to Rovers as the girls kept Oakleigh scoreless. Unfortunately, we only managed 1 single goal ourselves along with 4 points, so the game was still wide open.  Some great play throughout the quarter and special ‘second efforts’, in particular by Taylan, Grace M, Megan and Natasha. Grace A was dynamic right from the start and was willing herself to each contest.  Scores at the main break were Rovers 3.4.22 to Oakleigh 2.0.12.

The third quarter became an arm wrestle again with one goal each for the quarter. Oakleigh had lifted but the mighty Rovers Women were responding with every challenge that was thrown at them. Savina, although carrying an injury, was giving her all and one brilliant baulk and twist she did left her opponent standing flat footed! Zara’s marking and kicking was giving us real drive. Kaitlyn was creating opportunities with her teamwork and smart thinking skills.  Scores at three quarter time Rovers 4.4.28 to Oakleigh 3.0.18.

Still only 10 points in it! This quarter however, all the girl’s hard work for the first three quarters started to pay off. Chloe M playing her first game back after breaking her nose was impassable in defence all day…she was inspiring to the whole team and spectators alike!

A forward thrust created by Chloe Mc whose great backline work and kicking led to another Rovers goal! The floodgates had opened…then not long after Catherine gathered the ball in the goal square and gave a quick-fire handball to Hayley who slotted her second goal in a row!

Great forward pressure saw Jaimie playing another good game, gather the ball and bring up a point for the last score of the game.  A convincing five goal win for the Rovers Women which is the fourth of the season and sees the girls sit third on the ladder.