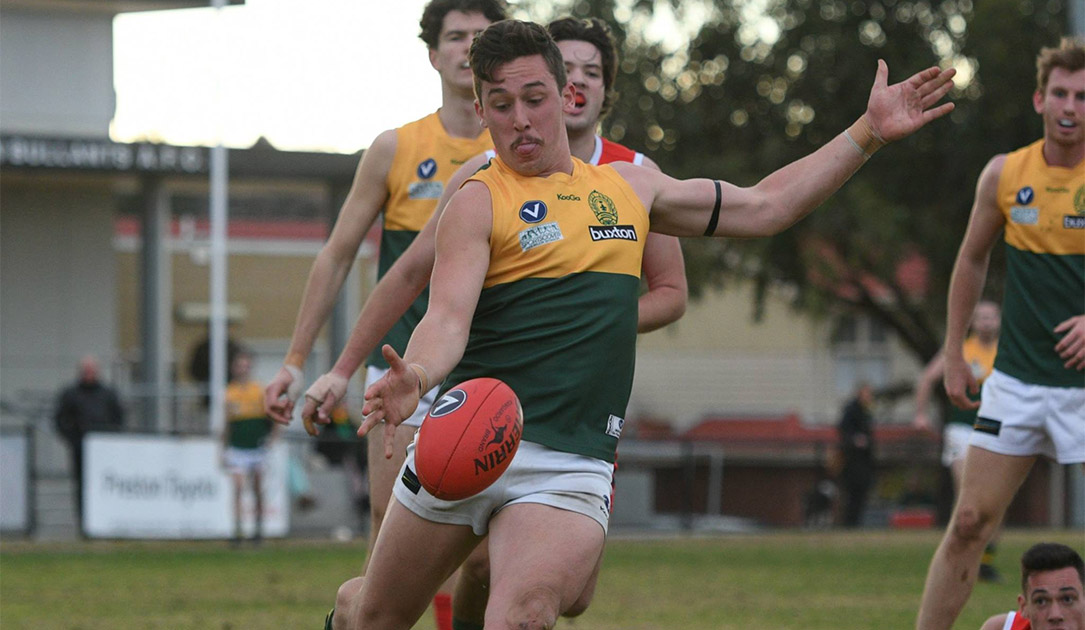 Hampton Rovers made it four consecutive wins on Saturday, defeating Preston Bullants by 45 points away at Ruthven Reserve.

Club statisticians Bill Campbell and Max Grimmer reported the boys logged 89 tackles in four quarters of footy on Saturday – a record for the year.  This no doubt explained why the Bullants lived up to their emblem’s reputation in putting on an aggressive, angry and belligerent performance while the Rovers just doubled their score.

Highlights for the day were few and far between.  The Chief provided a couple and these. The Bullants, having hit Ant Folino late and high, the Chief remonstrated with the player responsible and ended up taking on half of the opposition who only achieved in shredding  his jumper.  His other highlight was late in the last quarter, a ball up just out from our goal, the Chief bustles his opponent out of position and with a deft tap lands the ball in the Duck’s outstretched arms for the easy goal.    What was surprising was that this occurred on a day where Josh Broadley dominated the ruck yet we were for the most part murdered in the clearances.

The Rovers backs were sensational all day.  Preston would have been goalless at half time if not for the kick after the siren.  To keep them to 4 goals in the second half showed that the Rovers didn’t let up.  Rich Atkins knocked up taking marks as the loose man back and big Josh Pavlou dominated his opponent all day.  Pav’s left foot pass while running at full speed that hit Dylan Melnjak lace out was one of his highlights.  The coach actually singled out Dylan at the after game for his great game.  Both he and brother Joel were prominent all day as they outran, outmarked and eluded their opponents. Of course, their compatriots down back, Liam McCartney and Pross were very solid in defence and both featured in the best players.

Christian Carnovale was in and under and onto the Preston boys all day.  Our two beanpoles in Oscar Roberts and Matt Reinerts just kept pulling down those big marks – the smaller Preston opponents just didn’t have a chance.  Ben Kneebush keeps improving each week, more comfortable down back but he just keeps roaming forward.

Three goals to the skipper and three to Jess Donald whose goals came from being the opportunist, right place at the right time.

Scott Ebbott, three time U19 B&F played his second game of the year in the seniors and seamlessly slipped into a midfield role where he had effect.  Not lacking in courage his desperation for the ball was a feature and clearly recognized by the travelling supporters.

All in all, a strong team performance that corrected the anomaly earlier in the year when the Bullants beat Hampton at home and inflicted the Rovers worst loss for the year.  While tight to three quarter time, it was inevitable that the floodgates would open and they did, with 11 scoring shots to 2 in the last quarter opening the margin to 45 points.

The Hampton Rovers cement a top 2 finish after a 45 point victory over Preston. The Rovers paid tribute to the late Brendan Robbins with black arm bands and channeled his courage all afternoon.💚💛

In the match of the round it was Hampton Rovers v Preston Bullants. The latter hoping to keep their finals aspirations alive.

The Bullants started the match with the aid of a very strong cold wind to their end but couldn’t capitalise too much. Wearing the brightest jumpers I have ever seen it seemed like the Bullants had an extra 5 players but the Rovers had the skill to repel the many forward attacks led by skipper Jewell. It was pretty scrappy but fumbles by PB being their worst enemy while the Rovers continually rebounded out of defence despite the strong wind. At one stage Stewart received a handball pass and streaked through the middle to kick 40 metres into the Rovers forward line only to watch the wind blow it back 20 metres before it hit the ground! PB finally got a goal at the 22-minute mark while the Rovers understandably (for the conditions) remained goalless when the siren for the short break went. A quick check of the Live Ladder showed PB had moved to 6th spot on the ladder while the Rovers still retained 2nd spot!

At the bounce at the start of the second PB went defensive with 8 in defence which the Rovers elected to man up potentially leading to a very congested forward line. But the game was quickly on Rovers terms. Corey J took a nice pack mark 25m out 2 minutes in and goaled. A minute later the centre clearance by the Rovers was marked by Tim J at CHF and he settled and kicked the second goal within a minute! Another quick clearance and Corey J snapped the 3rd goal! Charlie was dominating the ruck and in play of the day he got a good tap to Clarke on the wing who got it to Bright who with a good long kick deep forward allowed the opportunity for Rick J to snap a goal and it was then 4 goals to the Jones’ to Preston 1! Ballard then had the temerity to break the run with a goal from CHF after a free kick to the Rovers was transferred down the ground. PB were starting to feel out of control and the cheap shots had started. Duddy joined the party with a very strong mark at CHF and kicked truly with the wind over his shoulder. Stewart soon after snapped a goal and then Lloyd decided to do the same and it was pretty clear game over, as the Rovers hit the main break with a good lead of 41 points as PB didn’t add to the score board. Live ladder showed the Rovers in 2nd spot while PB had slipped back to 7th.

PB again had the wind in the third and at least started to use it a little better. But they managed just 2 goals while up the other end the Rovers had a few chances. Clarke set up the only Rovers goal by bursting through traffic and handballing to Jacko in the clear deep forward. Junior took some good marks across half back as did Charlie to add to his great tap work. Cougs was also on top in defence with his usual dash, as was Wheels, well supported by Innes using his strength. Lloyd getting a lot of it, using his pace well. A good quarter by the Rovers to be only outscored by 5 points despite the strong wind. PB resorted to some cheap shots again as they were second to the ball.

At the last break the Rovers coach declared 6 goals was needed in the last quarter to finish the game off! So, with that ringing in their ears and the aid of the wind the Rovers again dominated the play. Stewart snapped his second for the day. Soon after Jacko marked and goaled. He then received the benefit of a relayed free in the goal square for his 2nd for the qtr. Within minutes he had a hat trick of goals after being on the receiving end of an unselfish short pass from Tim J after a strong pack mark. He then shortly after decided it was his turn and snap goaled thru heavy traffic for his second of the day. Clarkey completed his day out with a gaol on the run after a receive from Junior to give the Coach his request for 6 last quarter goals

Overall a great team effort to the Rovers. They played the conditions well as per coaches team plan and looked for each other to hit triple figures again despite the blustery conditions. Good midfield work and yet again great defence by the units down back which have reached a level of understanding of each other to work well together.  A great captains game by Jewell and led well by the experienced Dudds and Flahive.

What a way to finish the home and away season.  The Rovers had already secured a finals berth and Saturday’s result would have no impact on ladder positions.

Great to see skipper Adam Power in the goals and currently 3rd on the goalkicking ladder only 4 goals behind the leader with a couple of finals to play.  Could he get up and take the crown?

Also good to see Tom Youl getting those games under the belt before the finals and with Huggy and Christian Harbour in form our finals chase is on song.

The Rovers face UHSVU in the first semi final this Saturday at Brens Oval (Royal Park) commencing at 10am.

Seniors: Thanks to the Trainers, Max Grimmer and Billy Campbell for doing the stats, Kam Atkins for timekeeping, Lachie Wheeler for running water, and Harry Crisp for Runner duties.

Reserves: Thanks to the Trainers, Ken Duddy for Team Manager duties and timekeeping, Neil Jackson for goal umpiring, and Harry Crisp for runner duties.