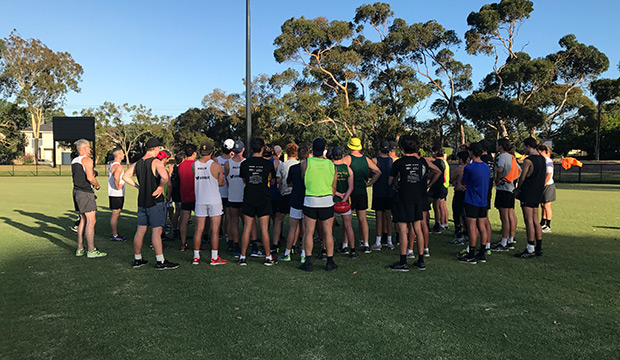 After an exhaustive pre-season, Hampton Rovers played their first of three practice matches last Saturday against MPNFL side Pearcedale Football Club away from home, with the Seniors going down while the Reserves/U19s had a win.

There will be three matches this Sunday, with the U19s kicking off at 9:30am, Reserves 11:45am and the Seniors at 2pm, at Frankston Oval (view map).

Numbers have been as strong as ever this year. Already, over 135 players are registered with the VAFA across four men’s teams and one women’s team. This year, the club will be fielding two U19 teams to cater for strong numbers across the younger age bracket.

The Rovers face Kew in round one of the VAFA season at Victoria Park, followed by the big Anzac clash at Boss James Reserve against Old Mentonians on April 22 – view the full fixture >

The new Senior Women’s team will participate in the VAFAW Lightning Carnival on Saturday April 1 at Sportscover Arena before hosting the historic first ever VAFA Women’s match on Friday April 7, under lights at Boss James Reserve. Tickets are now on sale to the pre-game function – view details >

Don’t forget the whole-club Gala Season Launch this Friday March 24 at the Brighton International. Promises to be a great afternoon and last-minute tickets are still available – view details >

2017 Club Membership is now available – show your support of the Rovers in 2017! Click here to view packages and purchase online.