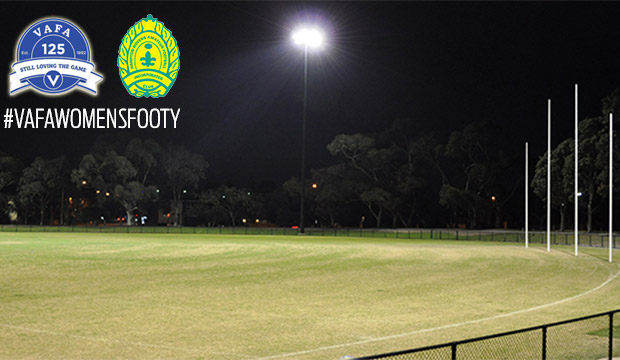 Hampton Rovers will have the honour of hosting the first ever VAFA Women’s game for premiership points, under lights against Ormond at Boss James Reserve on Friday April 7.

To mark the occasion, a pre-game function will be held inside the Wright-Scarlett Pavilion with a number of special guests in attendance in what’s sure to be a packed house.

Women’s footy at the Rovers has grown from a pipe dream to something massive, already with 42 players registered for the 2017 season. Recently, Simon Black took training with 45 girls on the track. The excitement and enthusiasm continues to grow, as does the skills of the players as they head towards the first game.

Now in its 125th year, the Victorian Amateur Football Association is expected to have around 40 clubs field women’s teams in the inaugural year of female football. A lightning premiership will be held over the first weekend of April with the season commencing the following weekend.

It was confirmed at Monday’s VAFA Members Meeting and while the opponent is unknown at this stage, the Hampton Rovers Senior Women’s team will be involved in the first official game for the competition in what will be a historic night at Boss James Reserve. A big crowd is expected and we welcome everyone to come along.

The pre-game function will be from 6pm with dinner commencing at 6:30pm – the cost is $30 per head with women’s player sponsors each getting one complimentary ticket (click here to sponsor a player). Seating capacity is restricted to 120 and this event is guaranteed to sell-out so get in quick to secure your spot. Further details including guest speakers will be announced in the lead-up to the night. Tickets are now on-sale and can be purchased online here >

The match against Ormond will commence at 7:40pm. With 20 minute-flat quarters, the match is expected to be wrapped up by 9:30pm. We encourage everyone to stick around following the game.

A number of special activities will be scheduled for the evening with details to be announced soon.