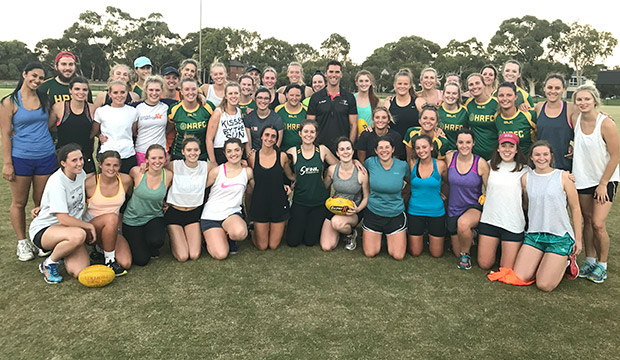 On Wednesday evening, AFL champion Simon Black ran training for the Hampton Rovers Senior Women’s team and there were 45 girls in attendance at Boss James Reserve.

The Brownlow Medallist and three-time premiership player for Brisbane Lions now runs his own Australian Rules Academy and the session gave the girls a valuable skills lesson, learning from one of the best, as they continue to improve ahead of the inaugural season. View photos on the Rovers Facebook page >

In its 125th year, the VAFA will have a women’s competition for the first time in 2017, with some 40 clubs expected to field teams. While the structure and fixture has yet to be announced, Hampton Rovers look set to host the first official game, under lights at Boss James Reserve on Friday April 7. A pre-game function will precede the opening match with a number of guest speakers and special guests in attendance. Cost is $30 per head which includes dinner – tickets are now on sale >

The club now has some 50 players wanting to play in the club’s senior women’s team, and while momentum continues to grow, the club will resist the urge to field two teams in year one, instead focusing on one team and having a successful year on and off the field. Due to the influx of numbers, priority will be given to those already registered and who have attended pre-season.

Earlier in the week, Lucy Timmons and Vanessa Graham were announced as inaugural co-captains of the Women’s team following a players vote. Both have earnt the respect of their teammates throughout the pre-season campaign which kicked-off back in November.

Meanwhile, the men continue to work hard as they prepare for Premier C section in 2017 under new coach Daniel Hughes and captain Christian Carnovale. Numbers have been the best they’ve been in years and the feeling amongst the young playing group has been electric. The club has record player registrations for this time of year and is set to field two Under 19 teams for the first time in almost two decades. Already, the club has 95 players registered. Players can register online here. Supporters can sponsor a player here.

A combined Junior and Senior Gala Event will launch the 2017 season for the club during the afternoon of Friday March 24 at the International of Brighton. Wayne Carey is headlining the guest speakers at this major event for the club. Tickets are now on sale – purchase yours online today or contact Steve Anderson to reserve a table of 10.