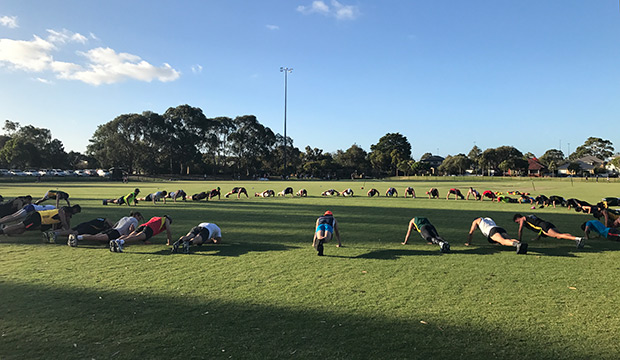 Pre-Season Training continues at Boss James Reserve for both men’s and women’s with excellent numbers and a great feeling amongst the group, while 2017 player registrations are now open.

Following the Christmas break, training got back under way on January 16th with two sessions per week at Boss James Reserve plus a player-driven session. New senior coach Daniel Hughes has fit in well and there is an excellent feeling amongst the group. In fact, numbers are as big as they’ve been for a number of years and it’s great to especially see so many young players. Numbers have been so strong, that the club looks set to field two Under 19 teams in 2017.

Even during the Christmas break, the players took it upon themselves to run their own sessions, led by new captain Christian Carnovale – up to three sessions per week. The commitment and enthusiasm shown is sure to drive the group to bigger and better things in 2017. The players are loving the upgraded Rovers Gym at the Boss and are putting it to great use.

Practice matches have been locked in against Pearcedale on March 18, St Pauls on March 26 and local rivals Ormond on April 1. Round one of the 2017 VAFA season on April 8 with the Rovers taking on Kew AFC away from home. After Easter, the club will host its first home game of the season, against Old Mentonians in the big annual match to recognise Anzac Day. The senior team will wear special commemorative Anzac Day jumpers for the big match.

While the guys go about their business, Women’s footy is absolutely flying at the Rovers! The girls are training Monday’s and Wednesday’s 7pm at the Boss and we’ve had over 40 players attend. Ned Fallon is doing a great job as coach and the excitement amongst the group is huge. The team will participate in a lightning premiership on April 1 at Elsternwick Park before hosting the first ever official VAFA Women’s match – under lights at Boss James Reserve on Friday April 7. The will be a massive night and the club will be hosting a pre-game dinner with full details to be announced soon.

Player registrations are now open for the 2017 season. Existing players can simply register via the online form or link in the email received. Players new to the club from another club or coming up from Rovers Juniors need to contact the club first so a player transfer can be submitted (email info@hamptonrovers.com.au). New players including girls who haven’t played for a club before can register on the form.

The Senior Player’s Season Launch will be held on the evening of Saturday April 1 at Hotel Brighton. This will launch the season for all our senior teams including the new Women’s team. Full details to be announced soon.

The club is also hosting a big whole-club sponsors/members Gala Function on Friday afternoon, March 24, at the Brighton International. This is an all-inclusive sit-down lunch function with a number of guest speakers including Wayne Carey. Huge event, not to be missed – click here for details & to purchase your ticket online now.

Great new sponsorship packages have been unveiled for the 2017 season in a fresh new brochure. Packages this year will take advantage of the new electronic LED scoreboard at Boss James Reserve. Click here to view further details about the packages. This year will also see the introduction of a Club Business Directory while the club will also enhance its Business Network. Details on Senior Player Sponsorship will be available soon.

The Senior Committee is working hard behind the scenes, led by Steve Anderson who enters his second year as President, to ensure all the pieces are in place for a successful year. There are currently a couple of vacant positions on the committee – if you’re interested in helping out the club, please contact Steve or anyone else on the committee.

2017 is shaping up to be an exciting year for the club with such strong player numbers, the introduction of women’s footy, and a number of new innovations. We look forward to your support!