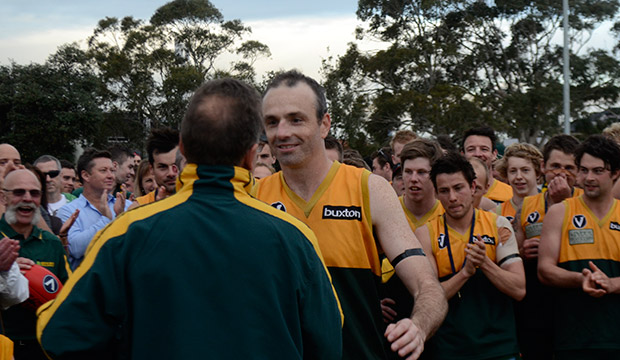 Hampton Rovers Football Club is thrilled to announce Anton Duddy as new coach of the Reserves in 2017.

Anton brings with him a wealth of experience both on the footy field and leadership off it. He is the current coach of East Sandringham Cricket Club and has previously captained the club. Dudds knows how to engage with large groups and will prove to be a great asset for the Rovers as the club looks to rebound next year.

Anton previously retired following the 2013 Senior Premiership, holding up the cup following a big win over Ormond at Sandringham, bringing down the curtain on a playing career spanning 277 games for the Rovers. He first played for the club in 1996, playing 29 junior games before 248 matches in the U19s, reserves and seniors. He has been a premiership player in U17s, U19s, Reserves and Seniors while his many awards include the reserves best and fairest in the Premiership year of 2004.

He spoke of his excitement in taking on the reserves coaching role:

“A great time to be back involved with a new senior coach, a group of good young players coming through, and most definitely excited about the opportunity to play a small part in setting the club up for some long-term success.”

“Also I can’t wait to pull the Green & Gold on again and put back into a club that has given me so much over the better part of two decades. Go Rovers!”

Anton replaces Anthony Quon who decided to step down following the 2016 season after two years at the helm. It has been a tough two years in Premier B against some quality opposition but Quonny has put in such a great effort and the club thanks him for everything he has done. He has now coached at the club on and off for 10 years – six at VAFA level after four in the juniors – and while uncertain of his plans for 2017, there will always be a position open for him at the Rovers.

The appointment of Anton Duddy follows the announcement of Daniel Hughes as new senior coach. John Cesario will again take charge of the Under 19s while Ned Fallon will head up the inaugural Senior Women’s team in 2017. The club plans to bring back the Thirds next year following a one-year absence and further details will be announced shortly.

Pre-Season Training continues to go strong with excellent numbers and a great feeling within the group. Training continues until December 16. The club welcome all new and existing players in 2017 – click here for details on playing for the Rovers >

The club will be making another big announcement prior to Christmas, on top of all the exciting updates we’ve announce thus far, next Wednesday. Visit the Rovers website then for all the details.