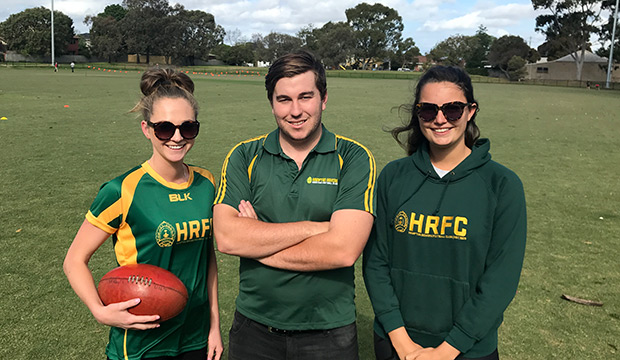 Momentum continues to build ahead of the first ever VAFA Women’s season and the club already has 45 girls who have expressed interest in playing next year. The club has been working hard to put the necessary pieces in place and the coach appointment marks an important milestone.

Ned steps up to become head coach of the new team after gaining experience as assistant coach of the Rovers Under 17s in 2016. On the field, Ned played two years for the Sandringham Dragons in the TAC Cup before three years at the Sandringham Zebras where he played four VFL and 28 development league games. That experience has developed him into a smart footballer and that’s sure to pay dividends for the girls as they develop their skills in the new VAFA competition.

Having joined the Hampton Rovers in 2009, Ned has played 47 games for the club and is a regular in the senior team, playing 11 matches this year with injury restricting him from a full season.

The club feels Ned is the right fit as coach of the inaugural women’s team and he’ll relish the opportunity.

“I’m honoured to be named head coach of the Rovers’ first ever senior women’s team and can’t wait to guide the girls through 2017” Ned said following his appointment.

Pre-Season Training commences Tuesday 13th December with two sessions prior to Christmas, both commencing at 6pm at Mentone Girls Secondary College (view details). An assistant coach will also be announced in the near future, while Amy Clements has come on as Team Manager.

The new season will commence the same as the men’s – the weekend of April 8th 2017, with a 14 round season plus three-week finals series with the Grand Final held on 19th August. Around 35 VAFA clubs are intending to field a women’s team and the competition is likely to be split into four geographic divisions with re-grading to occur early on.

To express your interest in playing or becoming involved in any way, visit: www.hamptonrovers.com.au/womens

The club is also thrilled to welcome Melbourne Metro Motors as team sponsor. Melbourne Metro Motors provides a unique buying experience for your used car needs. The company logo appears on the back of the newly delivered women’s team warm-up tops. For more information, visit their website at www.melbournemetromotors.com and Facebook: www.facebook.com/MelbourneMetroMotors