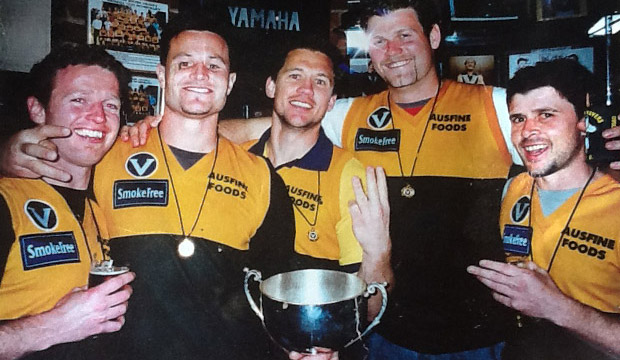 As we move into another campaign to make the finals and ultimately the big prize, getting into A grade, let’s not forget what happened 20 years ago. It’s what I like to call the start of an era, an era of winning Premierships.

Back in 1993/94, a group of ‘older club members’ came together in a meeting and decided that it was time to change the culture of the club. Hampton Rovers hadn’t won a senior flag since 1951 (A Grade) and we wanted another now and get the monkey off our back.

The group comprised of stalwarts with about 150 years’ experience in playing and running our great club, people like Don Scarlett, Peter Wolfe, Mark Crawford, Ian Rogerson and Karen & Max Grimmer and myself. Our on-field leader was Chip LeGrand.

The plan was simple – off-field the players were given everything they required to help them to do the job on-field, which fortunately happened losing only a few home and away games for the season.

Don was fantastic that year, his fire and brimstone speeches were legendary with the players and support staff. He was very good at tugging at the heart strings and many a time would stand some veteran supporter in front of the players and the tears would flow.

I think his most famous speech was about THE CLOCK, ask him about it one day it was looking back very funny.

As a by note, I am reliably informed that after such pre-game talks, when the players were on  ground in their huddle, captain LeGrand, Crawford and Steve Anderson would say to the troops, “righto boys forget everything Donny just said, listen up this is how we are going to win today”.

Game days’ Don was like a bear with a sore head, you couldn’t talk to him, he was so wound up in his pre-game preparations trying to make sure everything was spot on. If anything was Peter Wolfe and myself were the ones that copped it, I can’t believe that we are great mates to this day after those tirades.

Every away game, there were four people who travelled in Don’s car to games, Don drove, I was in the passenger seat and Wolfey and Karen Grimmer in the back. On those drives every person on the road was a dick head driver and didn’t know the rules, how we arrived in one piece some days was a minor miracle. But coming home was a different story after winning, Karen was now the driver and Don in the passenger seat, and I was told to “get in the back with Wolfey”. We then proceeded to the nearest Pub or Bottle Shop and loaded up with beer and bundy & coke for the trip home, usually singing Alice Alice who the is Alice – they were great times.

Don had an ‘agreement’ with Crawf (full forward), if he kicked 10 goals or more Don would buy a slab for the players. Crawf kicked over 100 goals that year and needless to say, Don bought a few slabs that year. In one game after Crawf had kicked 9, Don tried to take him off the ground to save another slab, naturally Crawf refused til he had that extra goal. It has to be said all this was fantastic for team bonding, it worked a treat.

Winning that premiership in 1995 was the shot the club needed. I’ll never forget the looks on supporters’ tear stained faces as we all hugged in the middle of ground. The monkey was well and truly off our backs, we even buried a toy monkey back at the David Street ground later that night.

I have never seen a bigger crowd in the rooms as I introduced each player to thunderous applause. We had done the impossible, we won the premiership, we did it in style and with some arrogance it has to be said. We celebrated long and hard, well over a week, culminating in a big BBQ at Don’s house and at one stage with every player in Don’s small spa.

The one thing I took out of it all was the BOND we all now share, it’s something that we as a group will always have, you might not see certain members for a few years as they move on, but when you meet up again, we smile at each other and hug because we are now a football family.

So 1995 was the start on an era, an era that has seen the club win a further four flags and I don’t see why it shouldn’t continue. Mark my words, Premierships aren’t easy to win, they take a lot of hard work both on and off the field.