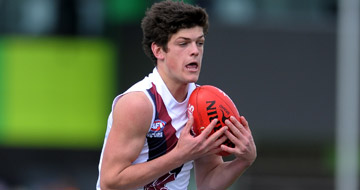 Hampton Rovers player Angus Brayshaw has been named 2014 captain of the Sandringham Dragons while a total of seven Rovers players have made the list.

Angus has previously been involved in the AIS-AFL Academy and was named MVP for Vic Metro in the 2012 national championships.

“He’s a stand-out in terms of his preparation and his leadership,” he said.

“We can’t speak highly enough of him at this stage. I’d probably go as far as to say he wouldn’t look out of place on an AFL list right now. He has got areas of his game he does need to work on but he knuckles down and goes to work on them like a true professional.”

No less than seven Hampton Rovers players have been selected amongst the list of 71 at the Dragons in 2014.

One of those is a newcomer to the Rovers in 2014 in Tyler Roos.

The name stands out, and not only because it goes with the number one jumper on the Sandringham Dragons list. Tyler Roos. The soon-to-turn 18-yearold is the son of new Melbourne coach Paul and has hooked up with the Rovers and Dragons after spending 2013 in the AFL Sydney Under 18 competition.

Roos was named in the best in 14 of his 19 matches for the UNSW/ES Bulldogs. He was also involved in the Sydney Swans player academy. He will be available for senior selection at the Rovers when there are no Dragons commitments.

The listed players have to look no further than Christian Salem, Karl Amon and Jayden Hunt for inspiration – the three Hampton Rovers players picked up by AFL clubs in the 2013 AFL Draft.