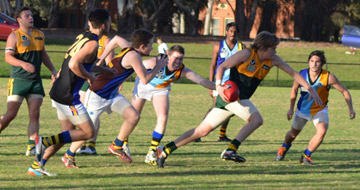 The Hampton Rovers Football Club has taken the initiative to offer free subs for Under 19 and 17 players for the 2014 football season in a bid to boost playing numbers.

The two age groups have traditional struggled to maintain strong numbers across the season, partly due to private school footy commitments and the natural drop-off of players moving from junior to senior football.

Following multiple discussions across both committees and approval by the board, the step was taken to introduce free subs for all players in these two age groups for the upcoming season. The success of the initiative will be closely monitored.

Those players who can only play part of the season due to other commitments such as school footy are welcome to join the many others in a similar position at the Rovers in 2014. Also players who’ve moved on from school and may struggle to pay fees are also encouraged to sign-up.

The Under 19s will again be coached by John Cesario in 2014 and numbers are currently ahead of where they were at the same time last year. John is after several more players to provide the core throughout the season in which the team will participate in VAFA U19 South division. Games are held on Saturday’s with most matches commencing at 2:00pm (fixture to be released soon). If you’re interested in playing for the Rovers, please contact John on 0412 490 925 or come along to pre-season training at Boss James Reserve.

Last year, the Hampton Rovers had a merged Under 17 side with East Brighton. They were the dominant team in division one of the SMJFL, winning the Premiership. This year the club is excited to be partnering with our close neighbours East Sandringham JFC and it’s a great opportunity for players to get involved for another successful year of junior footy. Further details & contacts will be provided shortly but feel free to contact the club if you’re wishing to join in 2014.

The new season is shaping up to be an exciting one for the Hampton Rovers in 2014 and we look forward to seeing everyone involved!