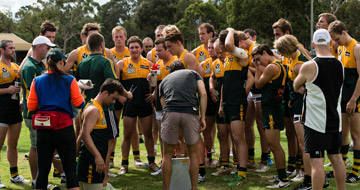 The Rovers play their first competitive practice match of 2014 this Saturday when they take on fellow-Premier C side Peninsula Old Boys at Moordialloc with three teams in action.

After Monash Gryphons withdrew from last Saturday’s first practice hit-out, that game went ahead as an intra-club match at Moorabbin.

A number of players were unavailable on the weekend due to cricket commitments and being away, but the majority of those will return and it’ll be a good opportunity for players to impress ahead of the 2014 season which is now just 25 days away.

The Under 19s will get underway at 10:00am with the Reserves/Thirds at 12 midday and the Seniors at 2:00pm. The games will be held at Parkdale Secondary College, Warren Rd, Moordialloc. (view map)

There will be a canteen open on the day. The club encourages all supporters to get along and see how the boys are shaping up ahead of the season. Live scores of the main game will be available on the Rovers website, mobile site and Twitter.

The final practice match the following Saturday will be against SFL side Moordialloc at Ben Kavanagh Reserve. The 2014 season kicks-off on Saturday 5th April at Boss James Reserve when the Rovers unfurl the premiership flag ahead of taking on the Parkdale Vultures.