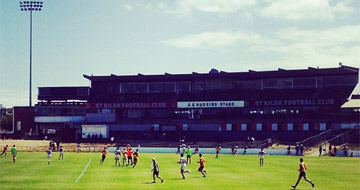 Saturday’s senior practice match at Moorabbin will now be an intra-club match after Monash Gryphons withdrew earlier in the week.

The Gryphons coach resigned earlier in the week for personal reasons and as such the club withdrew from the Rovers first practice hit-out of 2014.

The club has been seeking another opponent since the news came through but it has prooved too difficult at this late stage.

Therefore, an intra-club match will be played at the same venue, same time. With many players unavailable, mostly playing cricket or interstate, there hasn’t been huge numbers. However at least 40 are available for the match and if anyone else is keen for a game, please get in touch with Guy Martyn or one of the other coaches.

We’ll also require some help on the day such as running the boundary, water, etc. If you can assist, please come along.

The playing surface at the former home of the Saints is in top condition and it’ll be great for everyone to have a game on.

The match will commence at 1pm at Linton Street Oval in Moorabbin.

For more information on pre-season training including the other two upcoming practice matches, click here.