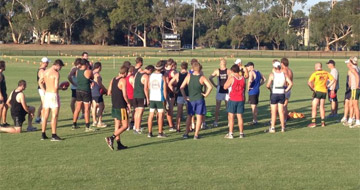 The pre-Christmas campaign was a successful one with good numbers in attendance including a number of new and returning players to the club. Now with the Christmas and New Year’s break over, it’s time to get back into it as we prepare for a big year ahead.

Training will be held on Boss James Reserve each Monday & Wednesday commencing at 6pm (please note only runners can be worn – no footy boots).

In 2013, the club won its first senior premiership in 12 years and in the process earned immediate promotion back to Premier C section. Plans are already well advanced in putting the foundations in place for another successful year. A new reserves coach has been appointed in Steven Kidd while a number of support roles are to be filled and the refreshed facilities at Boss James Reserve are looking sensational.

The senior section of the club will again field four teams in the VAFA: Seniors, Reserves, Thirds and Under 19s, and we welcome all players along to pre-season training.