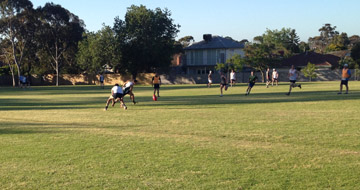 Senior Pre-Season Training for the 2014 VAFA season commenced on Monday with over 40 players in attendance and it continues each Monday & Wednesday. All new and existing players welcome for what promises to be another exciting campaign.

There were a host of new players to be club on the track and a number of players returning from injury which was great to see. The mood was enthusiastic and the very early stages of the 2014 campaign couldnt be more positive.

In 2013, the club won its first senior premiership in 12 years and in the process earned immediate promotion back to Premier C section. Plans are already well advanced in putting the foundations in place for another successful year. A new reserves coach has been appointed in Steven Kidd while a number of support roles are to be filled and the refreshed facilities at Boss James Reserve are looking sensational.

The senior section of the club will again field four teams in the VAFA: Seniors, Reserves, Thirds and Under 19s, and we welcome all players along to pre-season training, as well as the higher junior age groups who wish to get in a run prior to Christmas. We especially welcome players from the all-conquering 2013 SMJFL U17 div 1 Rovers premiership team.

Sessions will be held Mondays & Wednesdays until December 18. Access to grounds during this period is difficult so please meet at Boss James Reserve at 6pm, unless otherwise advised.

A meeting for all 2014 Under 19 players will be held on Monday 2nd December 7:45pm at Boss James Reserve. All new and existing U19 players are encouraged to attend.

2013 was a great year for the club, but things are just getting started. Hard work now translates to success in September. Get on board the Rovers in 2014!