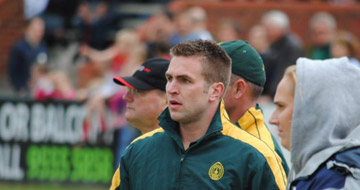 First of all, I would like to thank Matthew Gray (Mitzy) and the selection committee who appointed me in October last year and gave me a wonderful opportunity this year.

The season started in November last year with a meet and greet and six training sessions pre-Christmas. Mitzy, Fletch and I started our recruiting drive before this stage as we saw this as key for immediate success and promotion back up the grades. Recruits for 2013 included Daniel Corp, Mark Devereaux, Stuart Burggraaff, Kyle Pinto, Jay Ting, Adam McNeil, Josh Verlin from other clubs. There were also a number of players who returned for a full season from injury, travel or a couple of years in retirement. Some of these players included; Jesse Lovig, Jackson Ward, Richard Atkins, Nick Lyall, Luke Dallas, Michael Fletcher, Anton Duddy and Jason Zampaglione. With these players (and others) available for a full season in 2013, I was very confident of success in 2013.

We appointed two assistant coaches in Owen Lalor and Steven Spider Kennedy. Owies contribution cannot be ignored – a fantastic communicator with a very modern approach to football and how it should be played/trained. Spider complimented Owen in many ways and brought a wealth of experience as he has been involved in football coaching for around 30 years over many different ages, levels and competitions. I cant thank them enough for their input and I have learnt plenty off both of them.  I look forward to having them both around in 2014.

The season proper started off fantastically both on and off the field. There were 110 at the luncheon that day and they witnessed a great game of footy as we won the Buxton Cup with Daniel Corp being awarded the inaugural Russel Barnes Medal. Its worth mentioning that we had great luncheons every week with close to 100 attending on average with a top of over 130 in round 4 for our Ladies Day lunch.

The season continued in scintillating fashion as we went undefeated after 12 rounds. Some highlights from these rounds included:
 A come from behind win over Prahran in round 2 after inaccurate kicking all day almost cost us.
 Eddie Turner playing one of the best quarters imaginable in round 3 against Bulleen Templestowe to help us run over the top in the final quarter
 A monster 100+ point win against Williamstown who eventually finished 2nd.
 Beating Ormond on their home deck. Something that should not be overlooked. Eventual runners up and they were very tough to beat at home.
We went through a down patch from rounds 13-15. This time of year is notorious for numbers at training dropping, people being unavailable due to various reasons and a general drop in performance. We were hit by this and dropped two games in this period. Yes, we did have players missing and conditions were less than ideal but the fact is we had dropped our standard across the board and it showed up during these losses.

Round 16 saw a return to form and we finished off the home and away season playing some really good football, winning our final three games, and things were looking positive come finals time.

Our two finals played down at Sandringham were representative of our season. We outclassed our opposition on both occasions and with no disrespect to either team, I think the results were a good indication of our level of football this year and showed the sort of football we were/are capable of.

We (the club) shouldnt underestimate what weve done this season. To turn a club around from having a winless season, to only dropping two games and gaining instant promotion. The jump up to C grade isnt huge and many clubs in recent times have gone from D to B in two years (including Hampton Rovers about five years ago).

We played 39 players in the seniors this year and have started to build some strong relationships with some 16-18 year olds who will hopefully play senior footy for The Rovers in years to come. Add this to some of the guys (Matt Care, Josh Schmitz, Nick Lyall, Sam Clements) who were very unlucky to miss out on our grand final for different reasons, our future over the next five years and beyond looks very healthy.

Some of the people who I couldnt have done my job without include;

In finishing, I would really like to thanks again Mitzy and the club in giving me an opportunity to return to the club and give me a start in the coaching world. As a young coach, Im in a unique situation where I get the opportunity to have relationships with a wide range of different people at the club and on many different levels. I could go from having a beer with a 20-year-old talking about what he was doing that night to talking about the game with some past players well into their 50s and beyond. Ive loved every minute of it and am seriously pumped for next season. My aim is to win back-to-back flags and everyone involved at the club should embrace that as it is more than possible.

Looking forward to seeing you all for the 2014 campaign.

2013 Season reports for all teams are available via the respective team pages.