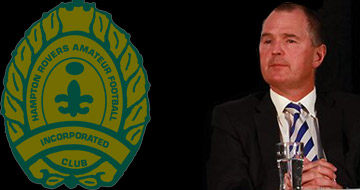 Some members will be aware that the Clubs Annual General Meeting is scheduled for 25th November.  Conducting the AGM is one of the Board of Managements key roles, as set out in the Clubs Constitution.  The role of the Clubs Board is to oversee the proper management of the Club, including enforcing its Rules and managing its Financial affairs.

Most of the Clubs operations are the responsibility of the two Committees, but the Board is in place to oversee some of the more important of these functions such as Budget setting, Risk Management and ratifying the appointment of the Senior Coach.

One of the Agenda items at the AGM is the election of Officer Bearers and Section 22 of the Clubs Constitution specifies the structure of the Board of Management, thus:

I have decided to offer myself for re-election as ongoing Chairman of the Board at the upcoming AGM, with the intention that I will resign the position sometime during the ensuing 12 months at which stage it is intended that Steve Annear will take over my role as Chairman of the Board.

Steve is well known to many members of the Rovers community.  He is a local resident with a family and has great experience at amateur football level in Perth.  Steves values and experience are terrific and ideally suited to the role of Chairman of the Rovers Board.  About 6 weeks ago, Steve expressed his interest in becoming involved in the Rovers to me.  It is my view that the Club is fortunate to have secured Steves interest for this role.

Importantly, this succession plan has been endorsed by Matthew and the Senior Committee and Belinda and the Junior Committee.

Anyone wishing to discuss the AGM of this succession plan is welcome to contact me.  Moreover, anyone wishing to stand for election as Chairman of the Board at the upcoming AGM will be formally invited to do so in the ordinary course of the Clubs business.

Chairman of the Board
Hampton Rovers Football Club