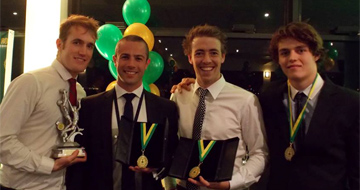 It was a great evening to cap off a brilliant year for the club. Over 160 people were in attendance at the Sandringham Football Club to bring the curtain down on the 2013 season.

Leigh claimed the Bob Cave Medal by finishing the season on 150 votes, 13 ahead of runner-up Danny Corp while Mark Devereaux was third on 113. Jay Ting and Jesse Lovig made up the top five.

The Rovers captain led the club to its first senior premiership in 12 years and took out the VAFA D1 best & fairest  his second league award, previously winning it in B section. He also represented the Big V in the VAFA rep game earlier in the year against Vic Country.

Gary Nash was announced as best senior club person for his great work around the club.

The night concluded with Lachlan Wheeler awarded Hampton Rovers Life Membership. Lachie is a most-deserving recipient with many years service to the club on and off the field and at committee level.

View the 2013 Best & Fairest votes for the four senior teams >

All the awards from the night: