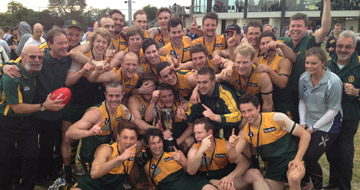 Hampton Rovers are 2013 VAFA Division 1 Premiers after they defeated arch rivals Ormond by 58 points in front of a big crowd at Trevor Barker Oval on Saturday.

Its the first senior premiership for the club in 12 years with the last flag coming in 2001 (C section) and the first time Hampton has defeated Ormond in a senior Grand Final since 1951 (A section).

Generally good conditions albeit for some light showers in the second half ensured weather wouldnt play a part in the game.

A big crowd rolled in to the Sandringham VFL ground, with VAFA officials estimating it at over 2,500, and that included a large contingent of green & gold which was great to see.

Hampton started the game like a house on fire.  Three goals on the scoreboard before Ormond had opened their account and things were looking good for the favourites.  Jay Ting in probably some of his most uncharacteristic disposals of the year could easily have popped through a couple of early goals but the radar was off beam.

At the 20 minute mark Ormond notched up their first goal and followed up quickly with another in a minute but Hampton still seemed to have control.  Josh McPherson, on more than one occasion showed his pace and delivered with a great goal on the run. The other youngster, Luke Verma showed what a talent he is with some very clever possessions.

Danny Corp goaled just before the siren from a nice pass from Josh Verlin.  Even by quarter time you could tell it was a tense final  Ting with a cut eye, Verlin who took a couple of big hits early and the bandaged head looked like he was missing an ear and Devereaux with his nose squashed!

At the break, coach Guy Martyn emphasised, pressure, pressure and more pressure.  The boys delivered. In the first five minutes, Hampton kicked three goals and you could see they had the Ormond boys measure. McNeil was in everything, he kicked the first goal of the quarter, took a pass from Corp for the second, and passed to Stuey Burggraaff for the third.  Ed Turner, having missed three weeks with an injured ankle, started to get into the game and Corps pass to him for the goal was a delight.

Rovers Captain and 2013 competition B&F Leigh Fletcher was being tagged but probably not as close as usual so he was getting plenty of the ball as was Jay Ting and Kyle Pinto.  Hamptons backline was probably under the most pressure it had been all year.  Ormond had some gun forwards, Chisholm, one of the divisions leading sharpshooters, Tabakman whod been kicking goals and our nemesis from previous finals, and Matthew Robbins who had been kicking bags each week.  While the Rovers kicked six for the quarter, Ormond werent to be denied and some strong marks resulted in them popping through four majors.

Hampton had a four goal lead and when Robbins was moved up the ground to get into the game, the boys knew they were in control.  While Jason Zampaglione, Richard Atkins, Jay Dillon and Rory Lynch had their hands full, the solidity of the backline wasnt wavering and with Jackson Ward doing some hard running, it was evident the Ormond forwards would fade.

At the main break, Hampton held a 27 point lead and it was with some confidence that the coach addressed the players, although a four goal lead can be easily closed in modern footy.  A little drizzle started at the break and as play resumed with Ormond kicking with a light breeze, it was clear the third quarter would be critical.  There were no goals for the first 20 minutes until finally, Danny Corp passed to Stu Burggraaff who snapped truly  one of his two goals for the day.  Ormond answered quickly having gained a soft free kick 20 metres out.   The snap by Jess Donald at quarters end extended the Rovers lead to 32 points.  It was hard tough footy that was a real slog with neither team giving ground.  Hampton seemed to have control but couldnt put multiple goals on the scoreboard to take the opposition out of the contest.

Hamptons experienced rucking duo of Michael Fletcher and Anton Duddy were totally in control and some of the delivery from the ball ups were a delight.  They were gaining possessions all over the ground primarily without pressure from their opponents.  With Leigh Fletcher, Daniel Andersen and Jesse Donald doing some heavy work, the opposition midfielders just couldnt get into the contest and the second and third efforts were sensational.

There was a huge crowd around the three quarter time huddle to urge the boys on to their first senior premiership since 2001.  Ormond started the quarter with a quick goal but after replies from Ed Turner, two from Kyle Pinto who was putting on a clinic on his wing, a captains goal on the run from Fletcher and the icing on the cake, a bullet like pass from Pinto to Devereaux to post the fifth goal in a row.  It was party time with a huge Rovers crowd behind the goals generating a great atmosphere.  Ormond were shot – Theyd stopped and as Fletcher kept bobbing up unattended, the Rovers were well and truly home.   When the Chief marked the errant Ormond kick, he casually handballed over the top to a running Speedy who, in covering 30m must have included about four baulks before kicking forward. Ironically, only a couple of minutes later the pair repeated the show  it was a pity Josh couldnt have finished off with the goal.

The back six (or seven) were once again sensational, led by their spiritual leader, the man with the most melodic name in ammo footy, Jason Zampaglione.  After half time they kept probably the best forward line in our division to just three goals.  The two big blokes in Rory Lynch and Jess Lovig did what they had been doing all year and killed the contests.  Matt Robbins, in his last game of footy, was completely shut out of the game, failing to kick a goal.  The run and spread of Zampaglione, Atkins, Dillon, Ward and in the second half McNeil was just too intense for the Ormond forwards seeking easy kicks.

In the closing stages of the game, the Rovers increased the lead by another 18 points to run out easy winners in what is a most deserved premiership for the Green and Gold. Jay Ting was awarded the best on ground award to go with his third placing in the competition B&F.

The celebrations got underway in the middle of Trevor Barker Oval with players and supporters overcome with emotion. The players belted out the club song with a sea of supporters joining in.

Back at the club, a huge crowd took it all in and cheered each player up onto the stage with Marto singing the praises of each of them. The celebrations continued well into the night and the following day with a replay of the game and live music. It was a fantastic weekend for the club and a sign of things to come with big plans afoot for 2014.

Its a remarkable turnaround for the Rovers, after being relegated twice in the previous two seasons and only winning two games and drawing one including no wins last year. An injection of players, coaching staff and officials off the field has turned things around.

Dont forget to purchase your ticket for the 2013 Presentation Night, to be held Friday 27th September (AFL Grand Final Eve) and the Sandringham Football Club. This event will sell-out and we encourage everyone to book online ASAP  Click Here.