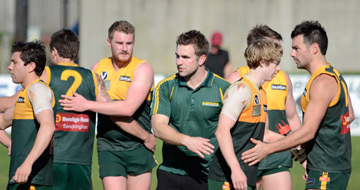 The Hampton Rovers will face Ormond in the 2013 VAFA Grand Final after they defeated Williamstown by 11 points on Saturday. Trevor Barker Oval in Sandringham will host the game on Saturday.

The Rovers, who finished three games clear on top of the ladder, won their spot into the season decider last weekend with a 39-point victory over Williamstown in the second semi final. Ormond defeated Prahran Assumption in the first semi and then Williamstown yesterday in the preliminary final.

Hampton Rovers and Ormond are two of the oldest and proudest district clubs in the VAFA with a big history and rivalry over many years – Saturday will be the next chapter, and it promises to be huge day.

The club will be hosting a Grand Final Eve function on Friday evening from 6pm at Boss James Reserve, with Chip Le Grand as guest speaker. CLICK HERE for all the details.

The Reserves’ season is over after they were defeated by Old Geelong in the preliminary final yesterday at Trevor Barker Oval. Full focus on the seniors for next weekend!

Stay tuned to the Hampton Rovers website all week for the build-up to the big game!