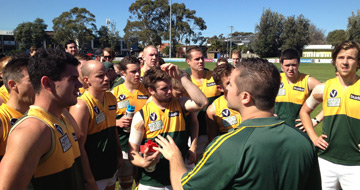 While the Seniors have the week off to prepare for the Grand Final, the Hampton Rovers Reserves are in action, looking for a win to earn a spot in the season decider. They face Old Geelong at Sandringham on Saturday.

Trevor Barker Oval is the venue again and the Rovers will be looking for a much improved performance after a poor showing last week against Ormond in the second semi final. There are two changes to the side  supporters should have received them in the inner sanctum email.

The Rovers have defeated Old Geelong on both occasions in 2013. By 28 points in round 9 at Boss James Reserve and 6 points in round 15 at Como Park with the last score of the game.

Old Geelong defeated Bulleen Templestowe in the first semi final last weekend to earn a spot in the preliminary final and theyll be pushing hard to go the next step.

Its a big game for the Reserves and we need everyones support to help get two Rovers sides into the Grand Final next weekend. Get along to Sandringham in your green and gold and show your support  match commences at 11:40am. Entry is $10 for adults, $6 for concession & free for children/pensioners.

The Williamstown CYMS v Ormond senior preliminary final will follow at 2:10pm, with the winner to play Hampton Rovers next weekend in the VAFA D1 Grand Final.