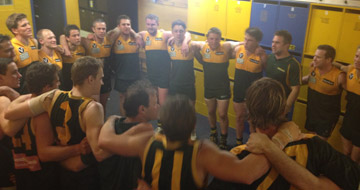 Hampton Rovers defeated Williamstown CYMS by 39 points in the 2nd Semi Final at Trevor Barker Oval on Saturday to advance to the Grand Final and earn immediate promotion back to Premier C section of the VAFA.

In front of a good sized crowd in warm and windy conditions at Sandringham, the Rovers played some of their best footy for the year to cruise through to the season decider in a fortnight.

Williamstown kicked with the strong wind in the opening term but didn’t take full advantage of it and managed just the two goals to lead by a point at the first break.

As has been the case so many times this year, the Rovers back six of Ward, Zampaglione, Lynch, Atkins, Dillon and Lovig dominated their opponents to take control in the back half.

The damage came in the second term as Rovers took total control of the game, kicking eight goals five to no score. In the middle, Mark Devereaux had the ball on a string, racking up countless possessions and thrusting the Rovers forward on numerous occasions. That had Hampton up by 52 points at half time and the game effectively done and dusted.

With the wind in the third quarter, Williamstown kicked three goals to two and as the Rovers took the foot off the pedal in the last, the CYs five goals to four.

Mark Devereaux, Rich Atkins and Danny Corp were best for the Rovers. Luke Dallas kicked 5 goals with 3 to Danny Corp and 2 to Stuey Burggraaff, Adam McNeil and Kyle Pinto.

The win sees the Rovers advance to the Grand Final and get the week off. Williamstown play Ormond in the Preliminary Final next Saturday, with the winner to play Hampton in the season decider. The Grand Final day and venue wont be announced until next Sunday.

The Grand Final berth also means the Rovers return to Premier C section for 2014 after just the one year in D1. A great turnaround for the club after double-relegation and not winning a single game in the seniors last year.

In the Reserves, Ormond were too strong for Hampton, getting up by 28 points. The Rovers kicked with the wind in the opening term and ran out to a commanding five goal lead. However Ormond hit back in the second quarter and they continued to dominate the match, in what was one of the poorer performances of the season for the Rovers.

Mark Short and Chris Long each kicked two goals. Best for the Rovers were Matt Innes, Dave Morton and Harvey Scholes. Having the double chance, the Rovers will front up again at Trevor Barker Oval next Saturday to take on Old Geelong, who defeated Bulleen Templestowe in Sunday’s 1st Semi Final.