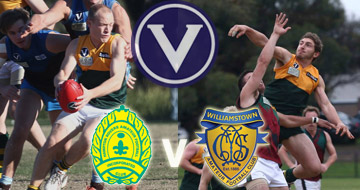 Hampton Rovers takes on Williamstown CYMS this Saturday at Sandringham’s Trevor Barker Oval with a Grand Final berth and promotion to Premier C section awaiting the winner. The Reserves are also in action taking on Ormond in the early game.

The Rovers have enjoyed an impressive season to-date, finishing the regular season as minor premiers with a record of 16-2. Now it starts again and finals are a whole new ball-game.

The Rovers and CYs are locked at one win each in the head-to-head during the 2013 season. In round 4 at Boss James Reserve, Hampton ran out 110-point victors. Williamstown responded at their ground in round 13, getting up by 14 points in a low scoring affair. A shock loss by Ormond meant the CYs claimed second spot on the table and the double chance.

The scene is set for Saturdays Second Semi Final at the Sandringham VFL ground. The Rovers have won three on the trot and last week defeated finals-hopeful Whitefriars by 56 points, relegating them to fifth while Williamstown had a massive win over the hapless Glen Eira Saints  their fourth consecutive win.

Positions in both the senior and reserve teams have been at a premium and training has reflected that this week. Selection headaches galore this week for the coaches and there were big numbers on the track Thursday night and it was great to see so many supporters watching training and in the rooms to hear the teams. While the senior side was fairly predictable, several quality players were unlucky to miss out in the reserves. The final teams should have arrived in members & parents inboxes.

The Seniors get underway at 2:10pm this Saturday at Trevor Barker Oval, Beach Rd Sandringham. The Reserves, who finished second on the ladder, take on first-placed Ormond with that game commencing at 11:40am.

We encourage all Rovers supporters to get along and get behind the boys in whats a huge day for the club. Members, supporters, families and friends from both the seniors and juniors  come along in your green & gold to show your support for both Rovers teams. The weather is expected to be 23 and sunny  perfect conditions!

We will be utilising the home changerooms at Sandringham  behind the grandstand in the south-western corner. Supporters should gather as one at this end of the ground with the primary position on the hill between the grandstand and bench.

Entry to the ground is $10 for adults, $6 for concession, kids U12 and pensioners are free. Please note no dogs are permitted in any VAFA finals venues.

Following the game, we welcome everyone back to Boss James Reserve where the bar will be open and well present the match awards.

If you are unable to make it to the game, then you can keep up-to-date on both games via the Hampton Rovers website and social media channels:

We would also like to see supporters posting on social media. Use the hashtag #gorovers

See you at Sandringham on Saturday. Go Rovers!