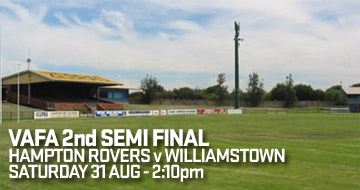 Hampton Rovers will take on Williamstown CYMS in the VAFA D1 2nd Semi Final this Saturday at Trevor Barker Beach Oval in Sandringham.

Rovers supporters only have a short distance to travel so we expect a big following at the game in whats the first finals appearance for the seniors since 2008.

With both the seniors and reserves finishing in the top two, both teams will play at the same venue on Saturday. The Reserves will kick-off the action, taking on Ormond at 11:40am, followed by the Seniors against Williamstown CYMS, commencing at 2:10pm.

A win for the seniors will secure a spot in the 2013 Grand Final and promotion to Premier C section for 2014.

In the other semi final, Ormond take on Prahran Assumption at Sandringham on Sunday, with the winner to face the loser of Saturdays clash.

The Rovers finished their season with a 16-2 record, defeating Whitefriars by 56 points at Boss James Reserve on Saturday, claiming the minor premiership in the process. View the match report.

Keep an eye on the Hampton Rovers website during the week for all the build-up to Saturdays big game.

The VAFA announced all venues and details on Sunday for week one of the finals  click here to view them.

For all the information including ticket prices, click here.