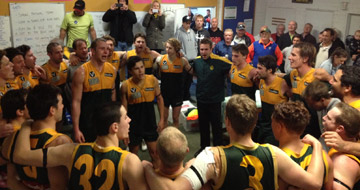 Hampton Rovers have finished the home & away season as minor premiers, defeating Whitefriars by 56 points at Boss James Reserve. The Reserves and Under 19s also recorded victories to make it three from three for the club.

It was a commanding win by the Rovers in perfect conditions as they stepped up preparations for the 2013 finals series which commence next weekend.

The Rovers had five changes going into the game and an additional change the morning of the game with Danny Corp a late withdrawal. That gave U16 player Nick Pavlou his senior debut and he was up to it, having a good game and kicking a goal. The other debutant was Charlie Miles who performed well in the ruck.

Hampton had a dominant first quarter but failed to kick right away from the visitors. Four goals to zip had the Rovers up by 27 points at the first break.

Whitefriars won the second term, kicking two goals to one, and at the main break it was 19 points the margin.

Inaccuracy cost the Rovers again in front of goal  by three quarter time, the scoreboard read 9.16 however with the friars managing just a single behind in the third term, the margin had stretched to 50 points at the final change.

The Rovers stretched that margin out by another goal, kicking four goals to three in the final term to run out comfortable 56-point winners in the final round of the home and away season.

Stuey Burggraaff and Luke Dallas kicked four goals each while Kyle Pinto kicked a couple. Best for the Rovers were Rory Lynch, Adam McNeil and Leigh Fletcher in his 150th VAFA game. Josh Verlin returned after a couple of months overseas and got valuable game time which will serve him well ahead of finals.

After not winning a game last year, the Rovers have finished the regular season with a record of 16-2. With the minor premiership wrapped up, thats only half the job complete. Now the club enters the business end of the season with full focus on the main prize.

Hampton Rovers will take on Williamstown CYMS in the 2nd Semi Final on Saturday 31st August at Trevor Barker Beach Oval in Sandringham, commencing at 2:10pm. A win would see the Rovers secure a spot in the Grand Final and return to Premier C section for next season. The loser will take on the winner of Ormond v Prahran Assumption.

It was the ninth and final Presidents Luncheon of the year and it was another strong attendance with over 60 people enjoying another quality meal  even if there were a few sore heads from Fridays Domino Luncheon. A big thanks to everyone involved throughout the year that has made the luncheons happen.

In the early game, the Reserves had a big 111-point victory over Whitefriars. The Rovers had 14 goal kickers with Chris Long leading the way with four majors. Best players were Nick Lyall, Nick Taylor and Brenton Holt.

The wins sees them finish the year in second position on the ladder and a semi final against Ormond on Saturday, also at Trevor Barker Oval, at 11:40am.

The Under 19s, out of finals contention, took on De La Salle at Darling Park, who needed a big win to have a chance of making the finals. The Rovers came from behind and kicked the last goal of the game to get up by five points. A fantastic win by the boys and a great way to finish the season.

Keep an eye on the Rovers website this week for all the finals action.