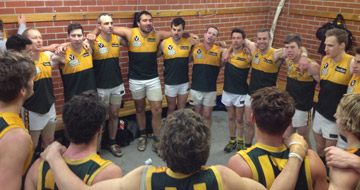 Hampton Rovers defeated Melbourne High School Old Boys by 36 points away on Saturday in the penultimate round of the 2013 home and away season. The Reserves also had a win and guaranteed themselves a top-two finish in the process.

The shock of the day was at Toorak Park where Prahran defeated Ormond to drop them to third on the ladder with Williamstown overtaking them into second, meaning the Rovers will now likely take on the CYs in the first semi-final Saturday-week.

The best news of the day was in the Reserves where the Rovers had another win while Old Geelong went down, meaning Hampton has guaranteed a top-two finish and double chance in the finals series, along with the top-of-the-table Seniors.

In the seniors, the Rovers went into the round 17 game at Melbourne High School with four changes – four out with injury and four returning from injury. The home side had plenty to play for  a win needed to help avoid relegated, so they were always going to put up a fight.

In the end, the Rovers were too strong, proving why they lead the way on the ladder, getting home by 36 points. The young guns were impressive with Luke Verma, Josh McPherson and Matt Care all playing good games. Jesse Lovig, Jay Dillon, Leigh Fletcher and Adam McNeil were also amongst the best.

The goals were again spread amongst the team with Stuey Burggraaff leading the way with five while Ed Turner and Luke Dallas kicked three each with two to David Morton and Matt Care.

This week the Rovers take on Whitefriars at Boss James Reserve in the final game of the home and away season. All supporters are encouraged to get along for a big day and encourage the boys as they march towards the finals series. Book your spot at the lunch now! Details of the first final wont be announced until next Sunday.

In the Reserves, Melbourne High had all the play early, leading four goals to one at quarter time. From then on it was the Rovers who took control, extending a six-point lead at the main break to a 28-point winning margin. Nick Taylor, Steve Anderson and Kyal McNeil were best for the Rovers with Michael Flahive and Brenton Holt kicking three goals each and Mark Short and Ryan Warren kicking two. As mentioned earlier, the win seals a top-two finish and a semi-final against Ormond Saturday-week.

The Under 19s played their final home game of the season and were defeated by top side Oakleigh. Campbell Jones kicked two goals with singles to Harry Hill, Christian Carnovale, Jack Zaina and Sam Cougan.