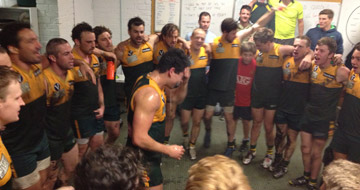 Hampton Rovers responded from last weeks defeat to record a strong 27-point victory over a determined Bulleen Templestowe at Boss James Reserve on Saturday. It was three from three for the Rovers with wins to the Reserves and U19s also.

The Rovers were tested at several periods by the visitors whore in a similar position to Old Geelong, fighting to keep clear of the relegation zone. They tried all day but it was the Rovers who showed character to remain undefeated at home in 2013.

In perfect conditions at Boss James Reserve, Hampton went in to the round 16 clash still without several first xviii regulars.

The visitors kicked the first goal of the day, before the Rovers kicked the next four. A 13-point quarter time lead was increased to 22 at the main break. Rory Lynch and Rich Atkins were superb in defence as they have been on many occasions throughout the season, while Jason Zampaglione and young Luke Verma showed their class.

It was a 15-point ball-game at the final change and the first goal of the final term 13 minutes in to Bulleen Templestowe reduced the Rovers advantage to just 8 points. It was game-on but the Rovers responded well, kicking the next three. A few goals either way for the remainder of the quarter and as the final siren blew, it was the home side saluting once again at home, this time by 27 points.

Danny Corp put in another solid performance for the Rovers and finished the day with four goals while Josh Pavlou and Stuey Burggraaff kicked three each.

Next up, the Rovers travel to South Yarra to take on Melbourne High School Old Boys in the penultimate round of the home and away season. Thats followed by a home clash against Whitefriars.

It was another great lunch prior to the main game with Warwick Capper entertaining the crowd of around 75. He stuck around to watch the seniors well into the third term.

In the Reserves, the Rovers held off a fast-finishing Bulleen Templestowe to win by 11 points. Shem Curry was the Rovers best while Michael Flahive kicked five goals.

The Under 19s recorded a big 73-point victory over Ormond at EE Gunn Reserve. It was a big turnaround by the Rovers, who were defeated by 91 points in the corresponding game earlier in the season. Hampton were boosted by a few U16s whose junior season came to an end last week. A seven goal last quarter sealed the win by the boys. Mackie Robertson, Harry Hill and Tim Jones were best while James Massey kicked four goals.