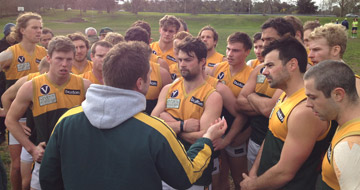 Hampton Rovers fell to their second loss of 2013 on Saturday when they were defeated by Old Geelong at a cold and windy Como Park on Saturday. It was better news for the Reserves who had a win to return to the top two.

Win many first team regulars missing, the Seniors struggled all day with the home side appearing to want it more. They got the jump and kicked the opening four goals of the quarter. Only a late goal to first-gamer Josh Pavlou reduced the deficit to 21 points at quarter time.

The Rovers dominated the second term, kicking five goals to zip, with Pavlou kicking the first, followed by McNeil, Corpy booting two consecutive goals to hit the lead and a 50 metre bomb from Ed Turner to close off an outstanding term by the visitors.

The third term was a tight one as rain started to fall, adding to the bitterly cold conditions. The home side kicked three goals to two and they held a three point at the final break. While Old Geelong had looked the better side in the premiership term, the Rovers supporters were confident, kicking to the scoring end in the final term.

It was goal-for-goal early on with both sides kicking two each. As the rain became heavier, it was Old Geelong who wanted it more. They went on to kick the next two goals and there was minimal scoring for the final ten minutes or so as the home side held on to win by 18 points.

Coach Guy Martyn was disappointed in the Rovers performance and with three games remaining before the finals series, some players need to show some improvement to ensure a successful end to the season.

Daniel Corp was a stand-out for the Rovers while Adam McNeil and Jason Zampaglione also played well.

Despite the loss, Hampton is still three games clear on top of the ladder. This week, they return to Boss James Reserve to host Bulleen Templestowe.

In the Reserves, the Rovers recorded a magnificent six-point victory over Old Geelong who went into the game holding top spot on the ladder. By the final break, the Rovers held an eight point lead but some injuries meant they had no one on the bench.

The home side took the lead but with only minutes remaining, captain Jack Baxter bombed the footy in from the 50-metre line, playing coach Michael Flahive ran onto it and booted the goal to give Hampton a five point lead. They held on with another behind scored, to record a great win.

The win leapfrogs the Rovers above Old Geelong into second spot and goes a long way to securing the double chance in the finals. Best for the Rovers were Jack Baxter, Liam Woodland and Shem Curry. View the full match report >

The Thirds played their final game of the season and were defeated by Therry Penola at Boss James Reserve. Stef Constantinou kicked two goals while best players were Liam Dynon, Tom & Sam Cougan, Nath Foster, Constantinou and Kieron Turner. Well done to everyone involved in the Thirds throughout the season and we look forward to seeing you around the club for the remainder of the 2013 season.

The Under 19s again struggled for numbers and while they were competitive in the opening half, were overrun in the second. James Massey was the only multiple goal kicker with two. Best were Jack Campion, Luke Morcom and Campbell Jones.

With the U19s playing a 9:20am game at Ormond this week, we welcome all players and parents to the Presidents Luncheon at Boss James Reserve, commencing at 12 midday prior to the seniors home game vs Bulleen Templestowe. Click here for all the details.