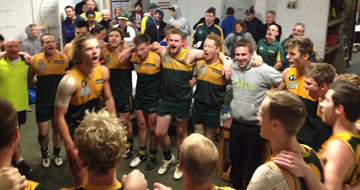 After dropping their first game of the season last weekend, the Rovers returned to the winners list with a commanding 76-point victory over Old Mentonians at Boss James Reserve on Saturday.

The players welcomed the ideal conditions at Boss James Reserve and it was the visitors who kicked the opening goal of the match at the ten minute mark. They also kicked the second before Jack Sperring in his first game for the seniors this year kicked Hamptons first. At the first break it was all square at 21-a-piece.

After a lacklustre opening term which included Mark Devereaux exiting the game early on due to injury, the Rovers stepped it up in the second stanza but inaccuracy cost them, kicking 4.6 to Mentones 2.0. The home side held a 26 point lead at the main break.

From that point on it was all the Rovers as they dominated the second half, booting 12 goals to the visitors three to record a strong win.

Ed Turner dominated up front for the Rovers, kicking eight goals. Adam McNeil was best on for the home side, Jack Sperring and Nick Taylor both playing their first senior game of the year performed well while Daniel Corp also had a great game, returning from a couple of games off.

The win means Hampton has returned to four games clear on top of the ladder after Williamstown were defeated. Four rounds remain of the home and away season before the finals commence with the Rovers taking on Old Geelong this Saturday at Como Park.

It was a big day at the club on Saturday with around 130 people in attendance at the Ovarian Cancer Luncheon. The club was honoured to have Nicole Livingstone as guest speaker. While later in the evening it was the $1,000 Draw and Auction Night which was another great function.

The Reserves also recorded a big win, defeating Old Mentonians by 94 points. It was a great turnaround considering they lost the corresponding game earlier in the year and they now face a huge clash this week against top side Old Geelong which will have a big say on who gets the double chance. Chris Long kicked another bag of six goals while Dave Morton and Kyal McNeil were amongst the best players.

The Under 19s went down to Old Mentonians at Keysborough while the Thirds unfortunately had to forfeit due to a lack of numbers following injury and unavailability  they play their final game of the season this Saturday at Boss James Reserve.