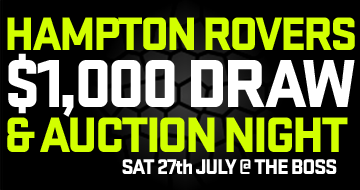 The major senior fundraising function of 2013 will be held on Saturday 27th July with our $1,000 Draw and Auction Night. We welcome everyone along for a great night.

You can purchase tickets prior to the evening from the club (Thursday training) and also at the door on the night.

There are a number of silent and major auction items available on the night, including:

Well have some music, the Geelong v St Kilda game on the TV and plenty more going on.

We encourage everyone to get along and support the club.