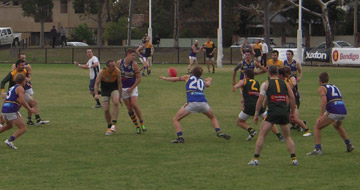 Hampton Rovers travel to Fearon Reserve to take on second-placed Williamstown CYMS in round 13 VAFA action on Saturday.

Last time they met in round four at Boss James, it was the Rovers getting up by 110 points but the opposition is a different proposition on their home turf. Hampton has five changes from last weeks side that defeated Prahran Assumption.

A win will see the undefeated Hampton Rovers go an incredible five games clear on top of the ladder.

Theyll have the support of many of the Rovers Ladies Members with a bus departing Boss James Reserve at 1pm following a BBQ breakfast. A couple of spots are still available  please click here for more information. Its free for 2013 ladies members and $30 for non-members.

The seniors commence at 2:00pm with the Reserves at 11:40am. Make sure you get along and show your support. Fearon Reserve is located on Osborne Street in Williamstown (Melways B10 56), not far from the VFL ground (go over the Westgate Bridge and take the first left)  view map.

Live Scores of the main game will be available on the Rovers website here or via our mobile site at m.hamptonrovers.com.au. You can also access the scores and additional updates via Twitter (@HRAFC) and photos on Instagram (hamptonrovers).

At Boss James Reserve on Saturday, the Thirds are first up taking on Ormond at 11:40am. Due to a large number of unavailabilities and promotions to the reserves, the thirds are a few players short as of Thursday night. If you want a game, please get in touch with Seb Wright on 0424 401 850.

The Under 19s are next up taking on St Bedes Mentone commencing at 2:00pm. If youre unable to get out to Williamstown then head down to the Boss to show your support for the Rovers.