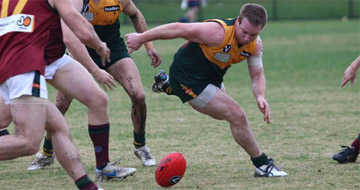 Following the week off, Hampton Rovers take on Prahran Assumption at Boss James Reserve this Saturday in round 12 of the 2013 VAFA season.

The two teams last met in round two at Toorak Park in a cracking contest where the Rovers came from behind and defeated the Two-Blues by two points with only minutes remaining. While the margin was close, the total scoring shots wasnt, with an inaccurate Rovers side having 28 shots on goal to Prahrans 16.

Saturdays game is looking like another good contest with the visitors sitting equal-third on the ladder and had some good performances during the season.

The undefeated Rovers have just the one change from the side that defeated Glen Eira by 109 points before the break. The side includes Adam McNeil who was reported in the last game, but was acquitted at the VAFA tribunal  the second Rovers player from as many reports this year.

All supporters are encouraged to get along to Boss James Reserve. The seniors commence at 2:00pm with the Reserves at 11:40am.

Final bookings are now being taken for the Past Players Luncheon. Of course its not only past players welcome, everyone is! Just $30 for the best lunch in the Ammos. Commencing at 12 midday  click here to read more.

The Thirds venture out to Bulleen Templestowe to take on the bottom side with the early start time of 9:20am. The Under 19s make the short trek to Parkdale to take on the Vultures who are also at the foot of the table. Kicking off at 9:20am also.

Following the matches, hang around at Boss James Reserve where the bar will be open from the final siren of the seniors (approximately 4:30pm). Match awards will be held at around 5:30pm.