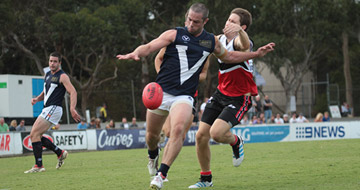 Hampton Rovers captain Leigh Fletcher has been named Vice Captain for the VAFA B-D4 representative side to take on AFL Victoria Country on Sunday at Albert Park.

The four-time club best & fairest winner has previously represented the VAFA on two occasions, last year against the Eastern Football League and in 2008 against the VCFL.

Sundays game commences at 11:15am at Harry Trott Oval, Albert Park (Collegians home ground). Across the road at Junction Oval, the U19s commences at the same time, followed by the VAFA premier division representative game  all three games are against AFL Victoria Country.

Danny Corp was also selected in the original squad but had to pull out due to being unavailable.

Read more about Sundays representative games and view the final teams here on the VAFA website here. Also download the new VAFA Amateur Footballer iPad app which allows you to view all weekly records free of charge. Simply search for VAFA from the App Store.