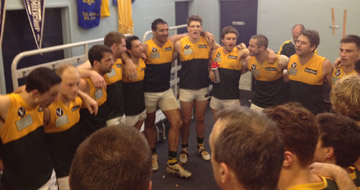 Hampton Rovers had a comprehensive 109-point victory over Glen Eira at Packer Reserve on Saturday, extending the winning streak to 11.

The Rovers had five changes going into the game and it wasnt expected to be as easy as the round five encounter when the ladder leaders got up by 188 points at home.

Hampton were far from their best and it was a scrappy affair played in ideal conditions for footy, but a wins a win. The Saints tried all day and they managed to kick eight goals – the last four kicked in the final term.

An eight goal to zip opening term by the Rovers had the game effectively over at the first break. They went on to kick another 15, but accuracy frustrated the coaching staff and spectators, with a total of 50 shots on goal split 23-27.

Adam Power returned to the side and turned back the clock, booting eight goals, while Mark Devereaux was best on for the victors.

Injuries again caused concern for Hampton. After losing Sam Clements for the season last week, Ed Turner came off the ground in the second term and played no further part. The bye weekend has come at the right time with a number of players sure to enjoy the rest.

The entire VAFA has a bye next Saturday to allow for representative football. Following this, the Rovers host Prahran Assumption at Boss James Reserve in whats looking like a good contest. Last time they met at Toorak Park, Prahran pushed their opponents all day and the Rovers had to came from behind  sneaking home by two points with minutes remaining.

The Reserves had a dominating win, defeating Glen Eira by 201 points. Hampton kicked 32 goals to the home sides two with Ash Fisher and Chris Long each kicking six.

The Thirds and Under 19s both found the going tough at Boss James Reserve. The Thirds, who struggled for numbers with so many players unavailable, were soundly defeated by Hawthorn (who would probably go close to defeating their own seniors side). Jack Sperring and Lachie DeLisle were best for the Rovers.

The Under 19s went down to Monash Blues by 49 points. Cam Jones and Jack Zaina were best with James Massey kicking two goals.