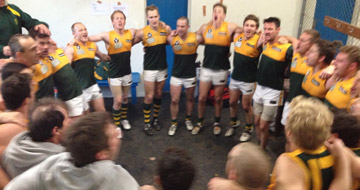 Hampton Rovers are undefeated after ten rounds following their 17 point win over Ormond at EE Gunn Reserve on Saturday, retaining the Buxton Cup in the process. It was a great game of footy with both sides in the contest all day.

A big crowd was on hand to watch two of the VAFAs proudest district clubs go head-to-head in the local derby. The match was officiated by Wayne Hinton who reached the major milestone of 600 VAFA games. Both teams formed a guard of honour as he entered the arena.

The Rovers had plenty of the play in the opening minutes of the game but failed to capitalise. It wasnt until the 18-minute mark that the ladder leaders kicked their first major, adding to their five behinds kicked already. From that point on, Hampton would only kick two more behinds for the remainder of the game.

Probably the Rovers best passage of play took place when Jase McCoy marked on the wing, passed to Jess Lovig who had crept down from CHB, his pass went to Josh McPherson who banged on the afterburners and kicked truly. The downside of the day was when former Ormond player Sam Clements went down early in the second quarter, stretchered off for what has been confirmed as a broken fibula. Hell unfortunately miss the remainder of the season.

The home side held the lead for the majority of the second term but at the main break it was all square at 7.5 apiece. Coach Guy Martyn urged his chargers to enjoy the challenge and to lift in the second half to show what sort of character they had as players and a team  and it worked. Hampton outscored the Monders six goals to two in a quarter that started as an arm wrestle and ended with an avalanche of goals in the last few minutes.

Two quick goals to commence the final term to Adam McNeil and Danny Corp stretched the Rovers lead to a game-high 29 points and the large contingent of visiting supporters began to somewhat relax.

It was a false sense of security however, with the home side banging on the next four goals, bringing the margin back within a kick.

Then it happened, the inspirational act to reignite the Rovers, Ed Turner on the far wing soared above his Ormond opponent to take mark of the day and it provided the spark the Rovers needed to switch on. Jay Ting marked and goaled from a Speedy pass, Ting passed off to Cracker for a long goal from the 50 and Ting again passed to Duddy for the final goal of the game to stretch the winning margin to 17 points. He was clearly best on the final stanza. Goal of the day came from Ed Turner, kicking from a tight angle on the boundary, a fair distance from goal in front of a large group of Ormond supporters giving plenty of advice, and slotting it right through the middle.

In the rooms afterwards, Josh Speedy McPherson was awarded the Russell Barnes medal for best player on ground. Jay Ting, Danny Corp and Anton Duddy were named amongst the best while Luke Dallas kicked four goals with three each to Turner, Corp and Ting.

The Rovers remain undefeated after 10 rounds (the only senior team in the VAFA) and sit three games clear on top of the ladder with eight rounds remaining in the home and away season. This week, the Rovers take on bottom side Glen Eira away at Packer Reserve.

In the Reserves, it was the top two sides doing battle and Ormond were too strong, getting up on this occasion by six goals. Bryce Pewtress, Tyson Woodland and Matt Care were best for the Rovers.

The Thirds had a comprehensive 109-point victory over Whitefriars at Boss James Reserve. Returning from injury, Jeremy Yelland was best for the Rovers while Michael Flahive kicked eight goals.

The Under 19s let in four late goals to go down to Peninsula Old Boys by 49 points. Tim Jones and Tim Hickox were best for the Rovers and Jack Campion kicked three goals.