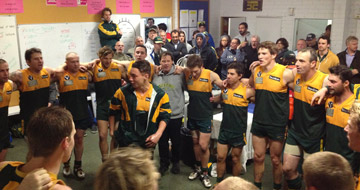 Hampton Rovers has completed the first half of the 2013 VAFA season undefeated with a commanding 78-point win over Old Geelong at Boss James Reserve on Saturday.

Following a tight start in which the visitors took it up to the ladder-leaders, it wasnt until the mid-way point of the second term that Hampton took control of the game in terms of the scoreboard, and kicked away to record a comfortable victory.

The Rovers had five changes going into the game with the inclusions of Mark Devereaux, Jay Ting, Ed Turner, Ben Clarke and young gun Luke Verma came in for his first game of the year in green and gold.

The Highlight of the day came in the second term in front of the clubrooms when our two youngsters in Luke Verma and Josh Speedy McPherson showed their speed and skills by hand and foot in bamboozling their opponents, getting the ball to big Sam Clements, who snapped a brilliant goal from the boundary, bringing the crowd to life. VIEW VIDEO >

Hampton didnt manage their first goal of the game until the 20 minute mark of the opening term while Old Geelong didnt kick a major until 12 minutes into the second stanza. A 13-point margin at quarter time was extended to 53 at the main break and the momentum stayed with the Rovers until the final siren.

Captain Leigh Fletcher was unstopable again. A great piece of play early in the third term when he grabbed the loose ball and launched into a bevy of opposition players, he pushed left, right, straight ahead, maybe a little straight arm and with four to them trying to get a hold of him he emerged free, ran onto his right foot and cooly passed off to the waiting Devereaux.

The back six were once again superb, restricting the opposition to just two goals until half way through the final quarter. When the high ball came in to the OGS forward line, Rory Lynch or Jesse Lovig consistently brought the ball to ground where either Jackson Warn, Josh Schmitz, Jay Dillon or Ben Clarke swooped to clear.

As has been the case in most games this year, goals were spread amongst several players with Sam Clements, Stu Burggraaff and Jesse Donald all kicking three each with two goals each to Jason McCoy whos been a big improver and is in a rich vein of form, Ed Turner returning from five weeks off and the experienced Anton Duddy whos also in great form after missing last year to injury.

The Rovers are one of only two senior teams in the VAFA still undefeated at the mid-way point of the season, with Eley Park Sharks (division 4) also yet to drop a game. Next week its the big local derby against Ormond whove won three on the trot and sit fourth on the ladder. Hampton got up by 23 points in the round one encounter and this round 10 match at EE Gunn Reserve promises to be a big one.

Earlier on Saturday, the Reserves recorded one of their best victories of the year, defeating equal-top side Old Geelong by 28 points in a high-standard top-of-the-table clash. Old Geelong were reserves premiers last year and after round eight, were sitting on an equal number of wins with Hampton.

In a high scoring first quarter where the scores were 5.3 to 6.2 in the oppositions favour, it was clear that the Rovers were in for a contest. However, as the game progressed, the home side gradually inched away from them so that by the main break, Hampton held a three goal lead and it looked at times that the Rovers relentlessness would simply wear the opposition down and the floodgates would open. Not to be. The Rovers three goal lead at the main break was extended to 28 points in a battle to the final siren.

Young Matt Care came up from the U19s in his first game for this season and kicked five goals for the day. It was also good to see those guys out of the seniors prominent in the best players. For the Ressies, it was no doubt the toughest contest for the season. Next week, they take on Ormond who sit equal top on eight wins.

The Thirds travelled out to Burwood for a 9:20am game against Emmaus St Leos and they looked like having their third win of the season, leading half way through the final term. But three goals to the home side gave them a nine point victory over the Rovers. Disappointing, however positive in the fact that it was a 85-point turnaround from last time they played. Continual improvement will no doubt see the Rovers win a few more games this year. Best for the Rovers was Lachie DeLisle while Ash Fisher kicked four goals.

The Under 19s were outclassed by Beaumaris at Banksia Reserve. Best for the Rovers were Josh Pavlou, Tim Hickox and Tim Jones. Jackson Sainty was the only multiple goal scorer with two.

Well done to all the Hampton Rovers players who got beind the Step Back Think campaign on Saturday by wearing orange shoe laces. View photo >