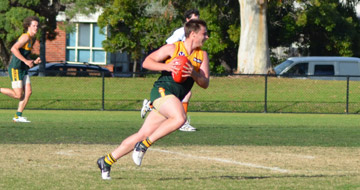 The Hampton Rovers Under 19s faced top team Oakleigh on Saturday and took the field with 17 players.

First quarter the Rovers matched it with Oakleigh and opened the game with a great goal by Josh Pavlou – returning to Rovers for his first game for the season. Another goal by Greg Thompson and a couple of near misses and the boys were only 15 points down at quarter time.

Second quarter both sides scored 2 goals in a very defensive game and the Rovers were in for a second half battle. The margin at half time was 16 points and the boys were feeling positive.

A passionate display of mateship saw the team pumped and ready to dish it up to the Oakleigh boys. Things got tough in the packs and Chase was taken off to hospital with a knock to the head.

A great effort by the whole team who lifted when asked by the coach. The 38 point difference at the final siren did not do justice to the job the boys dished up to the top team on the ladder.