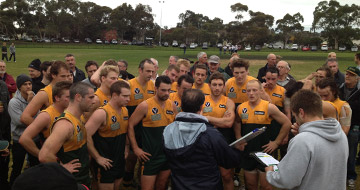 Hampton Rovers had a scare against ninth-placed Melbourne High, but in the end got the job done, getting up by nine points at a soggy Boss James Reserve on Saturday to remain undefeated in 2013.

On a day when some 17 matches in the VAFA were postponed as a result of overnight rainfall, conditions were fine at Boss James Reserve, albeit a wet deck, making for some classic wet weather footy for the first time this year.

It was a particularly scrappy opening term with the visitors pushing numbers behind the ball and the Rovers unable to thrust forward with ease. A nine-point quarter time lead was reduced to a single point at the main break following four second quarter goals from Melbourne High.

The Unicorns had come to play and they put on a display not indicative of their position on the ladder. Three unanswered goals gave the visitors a game-high 17 point lead at the 20 minute mark of the third term and an upset was on the cards at the Boss. Hampton responded with two majors and it was a five-point ball game at the final change.

The Rovers really hadnt been on song all day, not playing the style of footy the supporters had seen in the previous seven rounds. Some five changes may have unsettled the line-up, but Hampton has good depth and certainly had the quality to bring home the four points. Coach Guy Martyn revved up his charges at the final break and with the lights on at a dark Boss James, the fourth quarter got underway.

Four Rovers goals in the final term to Melbourne Highs two proved the difference. The first was a Daniel Andersen kick off the ground in the square, the second a miraculous left foot snap over the shoulder from the boundary line by Stuey Burggraaff, the third an accurate Daniel Corp pass to Jason McCoy who kicked truly and the fourth, a mongrel grubber punt from back pocket Jason Zampaglione that eluded a number of backs. A late goal gave the visitors some hope, reducing the margin to seven points, but as the rain started to fall, the Rovers maintained possession of the ball, adding two behinds to the tally before the final siren sounded.

A stellar second-half from skipper Leigh Fletcher ensured he was best on ground while Jason McCoy, Danny Corp and Anton Duddy also played well. It was also great to see young Josh Speedy McPherson in for his first game of the year.

Hampton Rovers go into the first break of the season three games clear on top of the ladder and take on Old Geelong in two weeks time at Boss James Reserve.

Off-field, it was also another success, with 80 people at the Life Members Luncheon which included 33 Life Members in attendance (while another six were at the ground but involved in match duties). Donny gave a special mention to Athol Porter, Dave Mather and Ken Wilson who were there and go back a long way in Rovers history. Also four of the seven female Life Members were present with Sue Anderson, Jenny Voss, Sally Williams and Gaylene Combe in attendance.

In the early game, the Reserves had a resounding win against Melbourne High, getting up by 93 points and holding the visitors goalless. Matt Innes kicked three goals and best for the Rovers were Matt Law, Steve Anderson and Charles Miles. The win lifts the Rovers to top of the ladder on percentage.

The Thirds faced a 9:20am match away at Williamstown and while they were down by only nine points at half time, the home side took control in the second half to win by 48 points.

The Under 19s took on ladder-leaders Oakleigh and put in a great effort with just 17 players, going down in the end by 38 points, finishing the game with 16 players. Josh Pavlou returned to the club during the week and booted five goals while other best players were Tim Jones, Campbell Jones, Henri Pryde, Jack Zaina, Luke Morcom and Chris Rees-Jones. Click here to read the full match report.

VAFA TV: The VAFA were up at the club last Thursday night to feature us on their weekly TV show. Its now online and can be viewed at www.vafatv.com. You can also access it via our Facebook page.