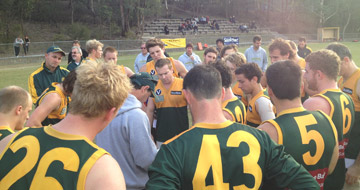 Hampton Rovers comfortably defeated second-placed Whitefriars by 85 points at Donvale on Saturday, extending the Rovers run to seven-zip and three games clear on top of the ladder.

Anton Duddy and Josh Schmitz returned to the line-up and the guys were switched on, ready for potentially their toughest test of the season.

In perfect conditions for footy and a nice setting, the Rovers were never really troubled. After a tight first quarter in which only three goals were kicked, Hampton dominated the remainder of the game, kicking 18 goals to four.

A five goal to nothing second term had the Rovers well on their way to victory, holding a 39 point lead at the main break while seven goals to one in the final term blew the final margin out to 85. The only downside for the Rovers coming in the final couple of minutes when a late tackle on Jay Ting knocked him out and left him feeling quite dazed.

The Rovers produced a number of brilliant passages of play and individual highlights. Sam Clements was on fire up front in the first half kicking four goals while Luke Dallas finished with three with Hamptons goals spread amongst 11 players. Jesse Lovig, Rory Lynch, Josh Schmitz and Jay Ting were best for the Rovers.

Next week the Rovers return to Boss James Reserve to take on struggling Melbourne High School. (book now for the lunch) That will be followed by a week-off before another home clash against Old Geelong to round out the first half of the season.

The Reserves also had a big win, defeating Whitefiars by 70 points. They restricted the opposition to just the two goals as they kicked 14 of their own. Matty Innes booted five for the Rovers while Chris Long kicked three. Tom Youl, Charles Miles and Shem Curry were best. View the full report >

The Thirds had their second win of the season, defeating Bulleen Templestowe by 47 points at Boss James Reserve with Steve Helliger kicking four goals while the Under 19s went down to Old Mentonians with Matt Care also kicking four and Tim Jones best.