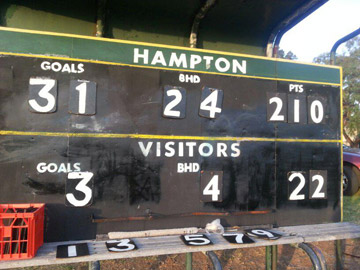 Hampton Rovers had their biggest win of the season with a 188-point romp over Glen Eira at Boss James Reserve on Saturday to go two games clear on top of the ladder.

It was one way traffic from the opening bounce as the Rovers booted 31 goals with 14 individual goal kickers. Mark Devereaux finished the day with seven goals and Ed Turner five. The visitors failed to kick a major until the final term.

The Rovers players were well aware of the visitors current plight, having struggled for the past couple of seasons and going without a single win last year. But the boys were relentless, pushing forward all day and restricting the Saints to just two behinds until the ten minute mark of the fourth quarter.

Hampton kicked eight in the first and repeated that in the second with the margin at the main break 103 points. That was extended to 172 points at three-quarter time. To their credit, Glen Eira had their share of the play in the final term and managed three goals to the Rovers five.

On the sidelines were Danny Corp, Josh Schmitz and Rich Atkins. Nick Lyall and Jack Baxter came in and performed well along with every other player in green and gold. Congratulations to Jason McCoy on reaching a milestone, playing his 100th game for the club.

There were plenty of first-class passages of play throughout the game. Leigh Fletcher put his hand up twice for goal of the day after turning on the afterburners and kicking truly. He received the best-on award in the rooms after the game. Jay Ting, Kyle Pinto and Jesse Lovig were also thereabouts.

14 of the 22 kicked a goal with seven kicking multiple. As well as Devereauxs seven and Turners five, Stuey Burggraaff and Leigh Fletcher kicked three each with Kyle Pinto, Nick Lyall and Jay Ting kicking two.

With Prahran Assumption going down, the Rovers are now two games clear on top of the VAFA D1 Ladder and take on Old Mentonians next week at the Playing Fields in Keysborough.

The Reserves also had a huge win, getting up by 164 points and holding Glen Eira goalless. Amongst the best players were Marlon Woltering, Tom Youl and Tyson Woodland. There were also 14 individual goal kickers, led by four from Tyson Woodland and three from Shem Curry.

The Thirds had a narrow defeat to Ormond. The Rovers held the lead for the opening half and were up by 23 points at the main break, but it was the home side who took command in the second half, getting up by 16 points. Garry Giasoumi was best for the Rovers with Elies El Chaar and Steve Howe kicking two each.

The Under 19s were comprehensively defeated by St Bedes Mentone. Matt Care continued his good form and was best for the Rovers. Callum Van Den Enden kicked two goals.

Support the Rovers in 2013 and purchase a Club Membership >