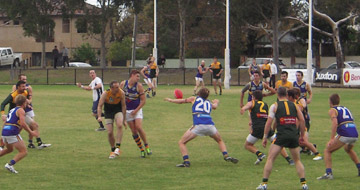 Hampton Rovers had a comprehensive victory at Boss James Reserve on Saturday, defeating Williamstown CYMS by 110 points and remaining undefeated.

The Rovers came out of the blocks firing but were inaccurate in front of goal and the visitors were luck the deficit was only 30 points at quarter time with Hampton kicking 4.8.

Williamstown kicked their first goal of the game 15 minutes into the second term and that was the only period of the game where they had control, kicking four unanswered majors.

For the rest of the game, the home side was in command, even during half a quarter with only 17 men following a send-off. Anton Duddy kicked a goal after the half time siren to extend the Rovers lead to 49 points.

Excellent defensive pressure from Hampton worried Willys forwards and like the opening term, they failed to kick a goal in the third. Meanwhile at the other end, the Rovers posted another six with Stuey Burggraaff and Sam Clements getting amongst the action  both finishing with five goals.

Leigh Fletcher was back to his best with a BOG performance and was well supported by Mark Devereaux. Rory Lynch had a great game down back and it was hard to fault anyones performance.

Rovers kicked seven in the final stanza to Williamstowns three as they cruised to a big victory to remain on top of the VAFA D1 Ladder.

It was a big day at the club with the Ladies Lunch attracting well over 100 people who were treated to renowned speaker Lisa McInnes-Smith. There was a bumper attendance from both sides following the match for the awards while later in the evening, the Boss was packed for Ladies Night. Both events supported White Ribbon  click here to read more.

The Reserves continued their faultless start to the 2013 season also, defeating Williamstown by 58 points. Chris Long booted five goals while Matt Powell, Charlie Miles and Shem Curry were amongst the best for the Rovers.

The Thirds unfortunately had a forfeit to due to a lack of numbers. Several unavailabilitys this weekend and a 9:20am start at Oak Park didnt help our cause. Next week the boys take on Ormond away and if youre interested in playing, please get in touch with the club or coach Seb Wright.

The Under 19s battled hard but went down to Monash Blues by 18 points. The Rovers started with just 18 players and two injuries meant they played the majority of the game with only 16, so it was a great effort. Nick Taylor kicked three goals while the best players included Matt Care and James Massey.

Next Saturday the Rovers host bottom side Glen Eira at Boss James Reserve. The Presidents Lunch is on again and were looking for another strong attendance so please book early in the week to assist the club with catering requirements.

Show your support and get being the Rovers in whats shaping up to be a great year by becoming a club member. Packages start at just $30 while packages which include lunches start at $110 or the new Ladies package at $70. The club currently has 52 members which is fantastic, but wed love to have more. Click here to view all club membership packages and purchase online.