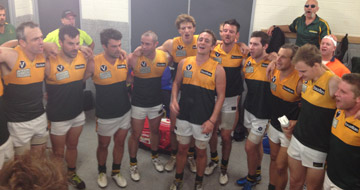 Hampton Rovers faced a tough away trip to face Bulleen Templestowe on Saturday and returned home with a 43-point victory and now sit clear on top of the ladder.

A strong swirling wind made conditions difficult at Ted Ajani Reserve and there was never more than 10 points in it until the 12 minute mark of the final term when six unanswered goals from Hampton blew the game apart.

Hampton kicked the first goal of the game and while they had most of the play early on, it was the home side which more shots on goal. They led by 10 points at the first break. Contrary to last week, the Rovers were accurate when they did thrust forward and their first behind didnt come until the 10 minute mark of the third quarter.

There was just two points in it at the main break and a goal after the siren to Ed Turner gave Hampton a five point lead at three-quarter time.  Bulleen Templestowe managed just one goal in the second half as Hampton went on a rampage in the final term to blow the margin out to 43 points against the reigning premiers.

Ed Turner was easily best on ground as he booted six goals and set-up several others. He was well supported by Danny Corp who had an influence all over the ground Josh Schmitz who went in hard as always.

The victory over the previously undefeated Bullants puts the Rovers in outright top position on the ladder after other undefeated team Old Mentonians were also defeated. Hampton have started the season positively with three wins  and look good at this early stage but still have several areas of improvement.

Hampton now return to Boss James Reserve for two consecutive home games. This week they face Williamstown CYMS and what will be a big day at the club with the Ladies Lunch and Ladies Night taking place. Click here for more details >

View more photos from Saturday on the Rovers Facebook Page >

The Under 19s recorded their first victory of the year with a big 90-point victory over Parkdale Vultures. Nick Taylor booted seven goals and Matt Care five goals while Matt Care, Tim Jones and Tim Hickox were best for the Rovers. In the early game at Boss James Reserve, the Thirds went down to Williamstown. View all results >