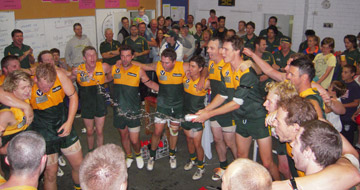 After months of anticipation, a new-look Hampton Rovers side won their first senior game since 20th August 2011 in B Section. Following a surge of new and returning players to the club over the off-season, Saturdays side had a different look from last year but a familiar look from previous years. In total there were 13 changes from the team that lined up in round 18, 2012.

Hampton Rovers and Ormond have had a big rivalry over many years being two of the VAFAs proudest district clubs. It was another great game on Saturday and high-quality affair worthy of a higher section.

Hampton kicked against the wind in the opening term and it was a former Ormond player in Sam Clements who kicked the opening goal of the game. It was a tight opening quarter with Ormond taking it up to the home side. They kicked the next three before the Rovers finished off the term well to lead by seven points at the first break.

It was a six goal to two second term for Hampton as they took control of the contest to lead by 33 points at the main break. The third term was four goals apiece with inaccuracy costing the visitors. At three-quarter time the margin was five straight goals.

The wind advantage had all but disappeared for the final term. Ormond kicked the first to reduce the margin somewhat and they increased their intensity, sniffing a win. The Rovers responded through Daniel Corp with the goal of the day, taking a contested mark and playing on to kick a beauty from the boundary in front of the Rovers faithful.  The last few minutes saw Ormond kick a couple of quick majors before Hampton finished the game with one of their own.

The home side played a brand of football the supporters hadnt seen in a long time and the big crowd at Boss James Reserve were enjoying every minute of it. Jay Ting, fresh from the SFL B&F last year, played well while Daniel Corp and Josh Verlin were taking strong marks and kicking well in front of goal, finishing with seven between them. Corp was awarded the newly formed Russell Barnes Medal for the best player on ground.

Prior to the game, there were over 100 people at the lunch where we heard from new club president Matthew Gray, new coach Guy Martyn, Dr Alan Pearce on the latest news regarding the clubs world-first concussion study, David Anderson was presented with his Life Membership, while the club also paid tribute to three life members who passed away over the off-season (Jan McGregor, Peter Streat & John Maurie Kelly).

It was a good day all-round for the Rovers with the Reserves also getting up by 23 points (read match report) and the newly-formed Thirds defeating Whitefriars by 65 points. The Under 19s battled hard against Peninsula but went down by 54 points. View all results.

View photos from the day on our Facebook Page >