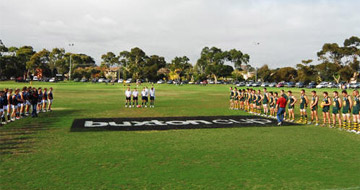 The anticipation has been building and finally, round one is here. This Saturday, Hampton Rovers host arch rivals Ormond in the Buxton Cup at Boss James Reserve. Its a huge day for the club and everyone is encouraged to get along.

The final training session was held Thursday evening with huge numbers on the track and in the rooms following. Over 100 meals were served by the volunteers in the kitchen before Saturdays four teams were announced.

All is set for Guy Martyns coaching debut and the senior side has 13 changes since the final game of 2012, with the notable ins including Daniel Corp, Mark Devereaux, Kyle Pinto, Jay Ting, Adam McNeil, Josh Verlin and others.

The best player on ground will receive the newly formed Russell Barnes Medal. Russell has had a big involvement in both clubs and will be a guest on the day.

The Seniors game gets underway at 2:00pm with the Reserves at 11:40am. Both teams will be looking to start the season strongly. Its looking like being a perfect day weather-wise and a large crowd is expected to be in attendance. All supporters are encouraged to get along and show their support.

The pre-game Presidents lunch is heading towards a sell-out with over 100 people already booked. There are limited spots remaining but bookings are essential so please book online or contact Gary Nash on 0407 313 054 by COB Friday. Don’t forget to support the club by purchasing a 2013 Club Membership – these are available online or at the club Saturday.

As mentioned earlier in the week, the club is very excited to welcome back the Thirds (or Clubbies) in 2013 after one year off, due to the huge boost in playing numbers. They also kick-off their season on Saturday with an away game against Whitefriars commencing at 11:40am. There are a few positions available so if you would like a game, please get in touch with new coach Sebastian Wright.

The Under 19s, under new coach John Cesario, take on Peninsula Old Boys at Narambi Reserve, Mornington, also commencing at 11:40am. The 19s are also a little light on for numbers and anyone interested in playing should contact John on 0412 490 925.

For all the match information including ground details, please refer to the Fixtures page.

Following all games, head back to Boss James Reserve where the Bar will be open until late. Match awards for all four games will be announced with the Seniors and Reserves at around 5:30pm. The footy on TV, music, poker, pool  its the place to be!