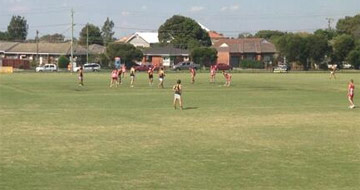 Hampton Rovers completed their preparations for the 2013 VAFA season with a solid 30-point victory over Mordialloc on Saturday.

In hot conditions at Ben Kavanagh Reserve, the Rovers came out of the blocks firing, kicking five goals straight in the first term. It was a goalless second stanza for both sides while the SFL second division side kicked their way back into the game in the third quarter. Hampton kicked another five majors in the final term to the Bloods three, to take the win by 30 points.

It was another good hit-out for the Rovers and the improvement over the three practice games has been noticeable under new coach Guy Martyn. There were a few missing on the weekend including Devereaux, Clements and Zampaglione while a few didnt play the entire game.

The Reserves had a good 20-point victory in the early game. While at Hampton, the U19s had their first stand-alone game, going down to De La Salle.

Later in the evening, the 2013 Hampton Rovers season was launched in style at the Banks Rowing Club at Southbank with over 100 people in attendance and great speeches from the new President Matthew Gray, new senior coach Guy Martyn and 2013 senior captain Leigh Fletcher.

Training continues Tuesday and Thursday this week in the lead-up to Saturdays season-opener against arch rivals Ormond at Boss James Reserve. All supporters are welcome to the club on Thursday evening to hear the round one teams. The Bar will be open from 6pm. Book now for the first Presidents Lunch of the year. It promises to be a big one so please book your spot early  see details & book online.