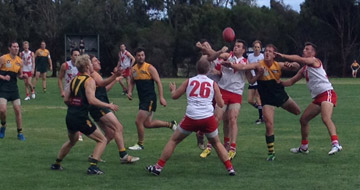 Hampton Rovers continued their preparation for the 2013 VAFA season with a solid 70-point victory over South Melbourne Districts at Keysborough on Sunday.

It was windy conditions at the Mentone Grammar Playing Fields but the Rovers came out firing with a dominant performance in the opening term before letting up in the second. The Rovers bounced back in the second half and finished the game strongly with a seven-goal final term.

The likes of Corp, Duddy, Verlin and Verma came in for their first hit-out of the year. Sam Clements and Daniel Corp were firing for the Rovers in front of goal. The Rovers had a few out of the side including Devereaux, Pinto, Burggraaff, amongst others.

Overall, it was a positive performance and a good hit-out for the boys ahead of the Easter break. Following that, itll be the third and final pre-season game before the real action begins, against SFL-side Mordialloc away on Saturday 6th April.

In the early game, the combined Reserves/U19 side also had a good win.

From this week, training moves to Tuesday’s and Thursday’s – 6pm at Boss James Reserve.